Imagine hosting 100 industry professionals at your company, showing them exactly how you run your business, then asking them to tell you what they think about you.

The good — and the not-so-good.

It can be a bit of both when Jim Paluch of JP Horizons People Solutions organizes a Face to Face Review at your landscaping company.

But the result is great for the company’s clients, who benefit from key changes their landscaping company makes afterwards.

Here’s How It Works 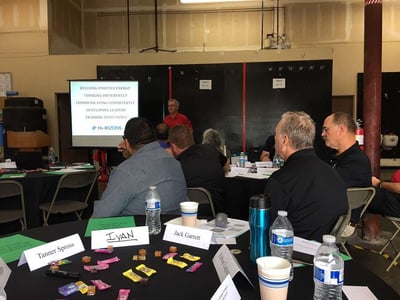 The host landscaping company sets up a series of stations at its site that shows how they operate, on all kinds of levels. There are stations about operations; sales; administration; fleet and equipment; leadership.

Visitors from other landscaping companies across the country divide into groups and visit the stations, taking in the information.

Then, they take part in small-group conversations to gain insight and provide feedback as they learn, discuss, and debate with peers.

Then, the nerve-wracking part — the hosts get to hear what everybody thinks.

What is the company doing great? What could use a boost?

Participants perform skits to share what they learned about the company. It’s a creative way to convey constructive criticism and positive reinforcement.

Good, Honest Feedback from Your Peers

Paluch, based in North Carolina, has been organizing these events for 16 years.

He started working on landscaping crews in high school, became a landscape architect in 1982, and developed into a multi-million-dollar landscape sales professional.

Now he leads the upbeat, engaging sessions that Level Green Landscaping managers say are transformative — whether you’re hosting or giving the feedback.

“You get good, honest feedback from your peers in the industry,” says Michael Mayberry, chief technical officer at Level Green who has taken part in several Face to Face events across the country.

“There’s a huge benefit to seeing how other companies operate,” Mayberry says. “How their yard is set up, how they get their crews out in the morning, what does their office look like, how do they logo their trucks?

“There’s a plethora of things that maybe you wouldn’t otherwise think about,” he says. “You don’t know what you don’t know.”

Level Green co-founders Doug Delano and Bill Hardy hosted a Face to Face event three years ago and have attended several others across the country.

It’s a win-win for everybody involved, Delano says. 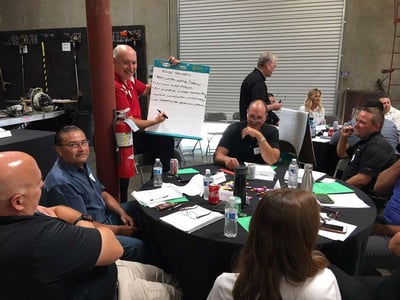 “Bill and I have always felt that we do our jobs well running our company, but there are so many different ways you can run a landscaping company,” Delano says.

“We want to stay open to new ideas, different ways people are doing things, and get out to see other operations,” he says.

He enjoys giving feedback to other companies, too.

“I’m a pretty vocal guy,” Delano says. “I speak up. Part of our job in this industry is to raise professionalism by helping educate other people.”

Level Green made several changes based on feedback from the Face to Face event they hosted — including Mayberry's job.

A former operations manager at Level Green, Mayberry was handling technology duties in addition to his full-time job. Then they hosted the review, and landscaping companies much smaller than Level Green were all asking the same thing: why were they still using so much paper when they could be handling so much with technology?

The eye-opening comments caused Mayberry to fast track to his current position as chief technical officer.

The key part of a Face to Face event happens on day two, when Paluch sits down with the host company to review all the feedback.

“There might be 100 suggestions for areas of improvement,” Mayberry says. “He says, ‘Let's pick the top five that will move the needle the most.’ Then you make an action plan for how to get there. None of it matters if we sit on our hands afterwards.”

When Level Green team members attend a Face to Face, they do a presentation to the management team when they return, to share their new knowledge.

Benefits Beyond the Feedback

The benefits go beyond the feedback, as landscaping professionals get to know each other and strengthen their bond.

“It was a great opportunity for them to see the culture of the landscaping industry as a whole,” he says. “As an industry, we want to see everybody be successful. And it was a great chance to show them that in this business, you continue to learn.

“I always walk out of there with my head held high,” Mayberry says. "I feel energized.”

Are you ready to work for a growing, successful company that actively looks for ways to improve?