When Dafne Aguilar started at Level Green Landscaping as a crew member three years ago, it was the first paid job she ever had.

“Before this, my job was mom,” she says.

She was. Now she operates a standing mower like a boss.

In fact, she is a boss. It wasn’t long before Dafne was promoted to driver, then supervisor. 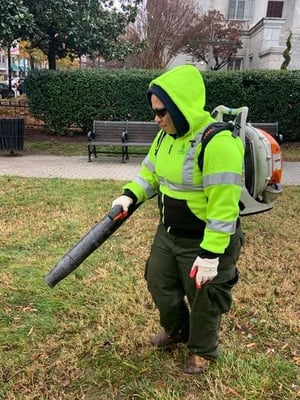 “I never knew about this job before I started to work here,” Dafne says. “I like what I’m doing. The flowers, the landscaping. Every time, I learn more and more and more.”

She learned the best methods for planting and watering flowers, mowing and weeding. She learned how to operate a standing mower, the big leaf-vacuuming trucks and can drive a truck with a trailer.

She’s the eagle eye on every job.

“I’m always looking at the details,” Dafne says. “Keeping my eye on the crew to make sure everything goes well.”

“They trust her. They miss her and ask about her when she goes on vacation.”

Dafne works on a downtown DC detail crew most of the year, spending much of her time tending to and watering annual flowers.

“That’s where she shines,” Kole says. “She knows just how to fertilize and prune flowers — those details that make a real difference for a property.”

But she's an expert at operating some of the landscaping heavy equipment, too.

“Landscaping equipment has come a long way,” Kole says. “It has hydraulics now, so you don’t have to be a big, strong person to operate it.”

It’s not that unusual to start at Level Green with no landscaping experience, Kole says.

“We’re always willing to train people,” he says. “And because we’re growing so fast, there’s lots of opportunity to advance with us. We love to promote from within.  Dafne can go on to be an operations manager someday.”

Better Than the Place Next Door

One of the great things about working in landscaping is the transformations you see every day.

“It makes me happy to go into a property where there’s a lot of leaves and dirt and trash, then at the end of the day it looks clean and beautiful,” Dafne says. “The property managers are happy. It feels good.

“When we plant flowers, it always looks better than the place next door,” she says. “I like that.” 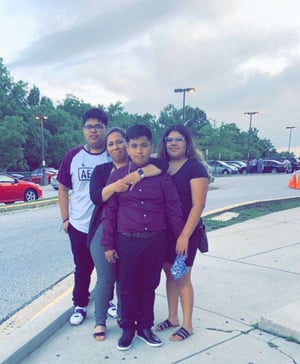 She loves to dance, go shopping with her kids and she makes a mean taco, with chicken, potatoes, poblano peppers and rice. When she describes them, you want one.

Sometimes other women ask about her work, intrigued by her job in a male-dominated field.

Dafne is just one of the dedicated team members we have here at Level Green Landscaping. And we’re always looking for hard-working, talented people to join our team.

Are you ready to work for a growing, successful company where you can learn on the job, and move up in your career?