When David Saravia moved to the U.S. from El Salvador in 2004, he landed a job in an Italian restaurant in Maryland, far from his life farming corn and beans.

The hectic restaurant pace, with servers shouting out orders — “one spaghetti, one chicken, one Alfredo,” he says — suited him.

Then he decided to try landscaping. Nobody was hollering about pasta, but he had no problem staying active.

“I Want To Be Somebody They Can Trust”

David started at Level Green in 2013 as a crew leader.

This year, he was promoted to operations manager.

“It’s a great opportunity,” he says. “They like to move people up here, which is nice.”

It’s a lot of responsibility. He loves it. 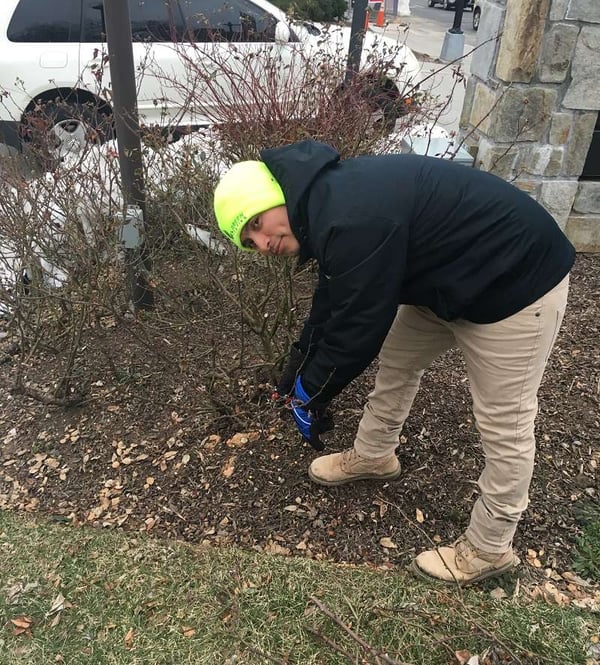 “The thing I love the most is the relationships I have with my crews,” he says. “I try to help them with their needs, not be just a boss, but a friend. I want to be somebody they can trust.”

As operations manager, David’s in charge of crew safety, taking care of equipment, making sure everyone is doing quality work.

He leads three crews who work in DC, including overseeing the landscaping for the Franciscan Monastery, more than 50 acres of property that includes a monastery, public gardens, shrines and chapels, a central courtyard, large reception hall, small forest and meadow.

His crew also tends the landscaping of the University of The District of Columbia.

He’s worked on a lot of high-end properties, from the luxurious Four Seasons Hotel to the Saudi and German embassies.

He has to be sure his crews have everything they need for a long day of work, so they don’t have to journey from the city back to the Level Green shop in Upper Marlboro, Md. to retrieve equipment or supplies.

He’s been helping his team members adjust to Level Green’s new computer system, which replaces much of their time-consuming paperwork.

“Sometimes people don’t like change, but you have to move forward,” David says. "There’s always going to be something new. We’re saving a lot of paper.”

Away from work, David’s family keeps him busy.

He and his wife, Birget Silva — a native of Nicaragua —have been married for 12 years and have two sons, David Jr, 11 and Kevin, 8.

David puts that Italian restaurant experience to good use at home.

“I like to cook for my kids,” he says. “They love it when i make Alfredo or any kind of ragu.”

“When I came to this country, I never thought all this would happen,” he says. “I came here single. Now, here we are. I have a beautiful wife, two kids. This good job.”

“You have to practice,” he says. “I watch TV, I listen to the radio and try to learn what they say.”

“Level Green is a good place to work,” he says. “They take care of you like family.

“I’ve made a lot of friends here,” he says. “I’m growing with them as they grow. I like that part.”

David is just one of the dedicated team members we have here at Level Green Landscaping. And we’re always looking for hard-working, talented people to join our team.

Are you ready to work for a strong, growing company that supports its team as they strive to grow?