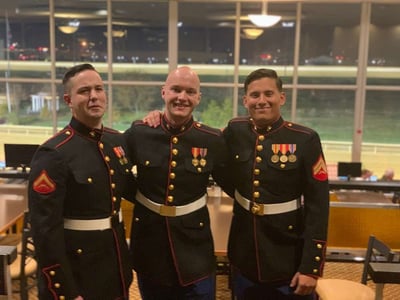 If that sounds like a Marine to you, you’re right.

Gabe joined the U.S. Marine Corps Reserve right after high school and has earned the rank of Corporal. One rank higher and it would be a full-time job.

He considered joining the Marines full time, but it was peace time, so he would have spent all his time training.

This way, he says, he has the best of both worlds.

“If my country ever needs me, I’m completely ready,” he says. “But meanwhile, I can have a full life.”

That includes being an operations manager at Level Green Landscaping.

Gabe graduated in 2017 from the University of Maryland with a degree in economics and worked at a landscaping company during college.

How do the two mix? Pretty well, he says.

“Economics is a broad degree,” he says. “It taught me how to be efficient, how a business should be run. All that is really relevant to landscaping. Pennies matter. There are a thousand other guys with trucks and trailers out there who are also doing this work. You have to be as efficient as humanly possible to compete.”

After graduation, Gabe signed on with Level Green’s management training program to prepare to be an operations manager.

“I was a little naive,” he admits. “I thought I could be an operations manager because I had a college degree. It’s a big deal. It’s very hard. There are 10,000 more things that go into it than most people realize.”

By the time he started his job, he says, he was ready.

“When I tell people I’m an operations manager for a landscaping company they say, ‘Oh, cool, you mow grass all day.’”

He laughs. “Not exactly.” 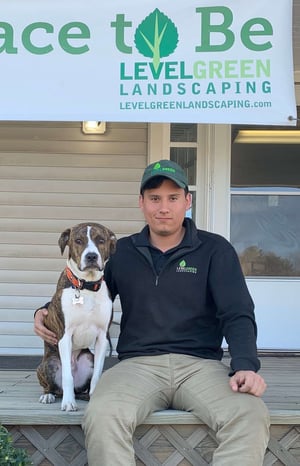 Gabe manages five maintenance crews and one turf crew — between 20 and 25 crew members.

The logistics of running the crews day to day is the biggest challenge, he says, juggling 75 job sites, ordering materials, ensuring job safety.

“But the most important thing is managing my guys,” Gabe says. “Keeping them happy. Making sure they’re getting paid. Talking to them about what’s going on.

“When you deal with guys week in, week out, you can tell if something’s off,” he says. “I have guys who have never missed a day of work, for years. Then suddenly they miss three days. When you ask them what’s up, you might find out someone close to them back in El Salvador died.

“These aren’t just workers who do their job,” he says. “They’re people. I learned in the Marine Corp, know your Marines and know their problems.”

He’s learned a lot of skills in the Marines that he uses on the job at Level Green.

When he learned his branch’s motto for snow season was “Failure Is Not An Option,” he fit right in.

“That was already ingrained in me,” Gabe says. “I’ll do anything humanly possible to accomplish a goal.”

“He doesn’t need to talk a lot about stuff. He just does it. He leads his crews by example.

“He has a really strong work ethic,” Schneider says. “He’s a young guy, and we don’t see that much in younger guys anymore.”

Schneider has given him tasks without a lot of direction, like running the turf program, and taking the lead on the company’s job mapping program.

“He takes it, and makes it his own,” he says. “With Gabe, everything has to get done. There’s no quitting.”

“That’s what helps us move forward,” he says. “Not just doing things the way we’ve always done them, but trying new things.” 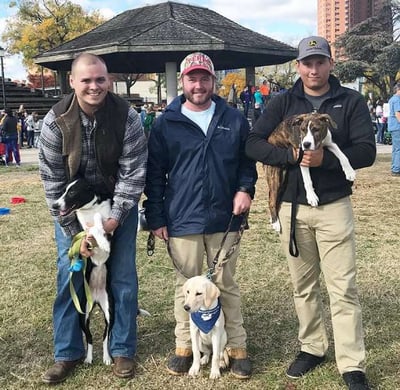 Even away from work, Gabe appreciates his job.

“When I’m driving around with my friends and we pass one of our properties, I’ll say, ‘Look at those plants! Look at how nice that lawn looks!’” he says. “There’s a real sense of pride.”

He loves everything outdoors. He hunts, fishes and hikes. He’s a hockey fan, cheering on the Washington Capitals. He loves death metal.

His new puppy, Bane (yes, that Batman villain) a 9-month-old Staffordshire terrier, often tags along on outdoor trips. He even goes to work with him, romping in the yard with other Level Green furry pals.

“He’s potty trained, but he still destroys all his toys,” Gabe says.  “We have to work on that.”

Failure is not an option.

Gabe is just one of the dedicated team members we have here at Level Green Landscaping. And we’re always looking for hard-working, talented people to join our team.

Are you ready to work for a strong, supportive company that makes its employees a top priority?