Mario Argeta Perez shows up to work every morning at Level Green Landscaping a half hour before he has to be there.

Ask him why he likes the place so much and he talks about “convivir.” It’s one of those Spanish words that’s tough to accurately translate to English.

But it basically means living with others in harmony.

It’s what everybody says about working at Level Green: It’s like a family.

And Mario is like that cousin everybody has who’s always smiling. 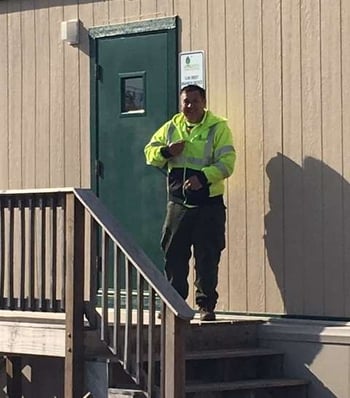 Mario has worked at Level Green for 15 years, starting out on a crew, then moving up to driver once he got his driver’s license.

“It was like working for the fire department, but delivering flowers,” he jokes, with translation help from his operations manager, Jose Aguilar.

Mario was soon promoted to supervisor, the job he’s had for the past 11 years.

He was a substitute math teacher at a university in Guatemala before moving to the U.S. and worked with farmers to teach them budgeting skills.

But work slowed down, so he followed friends’ advice to move to the U.S. to work in landscaping.

It was a big move. He’s glad he made it.

There’s a dedication needed for landscaping that Mario likes.

“When I come in every morning I have the attitude that I’m going to get things done and get them done right,” he says. “If I’m successful, it helps the company be successful.”

Along the way, he’s enjoyed expanding his knowledge about landscaping and learning about plants, he says.

His goal is the same every day: “Work together to get the job done on time, while being efficient and safe,” Mario says. “And at the end, everybody should be happy.”

It’s not as easy as he makes it sound. His crews work in the bustling urban downtown of the nation’s capital. Traffic. Pedestrians. Congestion.

“The challenge working in downtown DC is there are so many people walking around,” Mario says. “When we’re blowing off pavement or pushing wheelbarrows, people don’t stop. So we have to stop to make sure everybody walking by stays safe.”

“He Really Likes To Work” 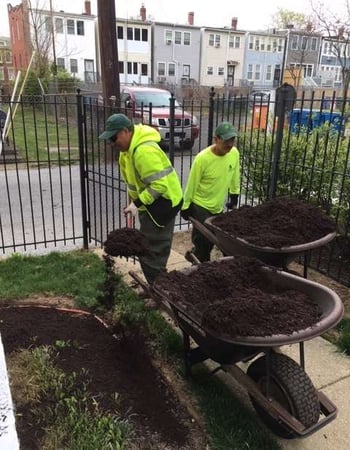 “He’s a loyal and dedicated worker,” says James Kole, Level Green branch manager and Mario’s supervisor. “He’s loved by all the other supervisors. He’s been here forever, so he’s always answering questions and helping other supervisors out.”
Operations manager Jose Aguilar has worked with Mario for three years.

“He beats me to work every day,” Aguilar says. “He’s always here 30 minutes before we start. He rarely takes vacation. He really likes to work.”

A good supervisor has to have a rapport with his crew members, he says.

“Mario has a great relationship with all his workers,” Aguilar says. “He’s always happy, always smiling. He always approaches people in a very nice way, with a smile on his face. How can you say no to a face like that?”

“They Appreciate What I Do”

The guy who loves being at work spends his free time watching soccer on TV, hanging out with his friends, going to church, and taking an occasional swim.

But he’s always ready for Monday morning. It helps, he says, when you work for a company that cares.

“Level Green has taken care of me,” Mario says. “They appreciate what I do.”

It’s all part of “convivir.”

Mario is just one of the dedicated team members we have here at Level Green Landscaping. And we’re always looking for hard-working, talented people to join our team.

Are you ready to work for a growing, supportive company where people love working together for a common goal?