You can plant all the flowers you want, painstakingly planning the beds and tucking them into the soil just right, but unless they get water, they’re doomed.

That’s where Robby Robinson comes in, arriving on time to customers’ properties several times a week with a 1,000-gallon tank of water and plenty of patience to let it soak in.

Robby has been at Level Green Landscaping for three years, starting out as a crew member then adding responsibilities as a driver.

During the growing season he mans a water truck, visiting a number of Level Green clients several times a week, keeping an eye on beds of colorful blooms and lush plants and making sure none go thirsty.

During the winter, you’ll find him doing snow removal. In the fall, leaf removal. And he drives truckloads of materials to job sites for enhancement projects. 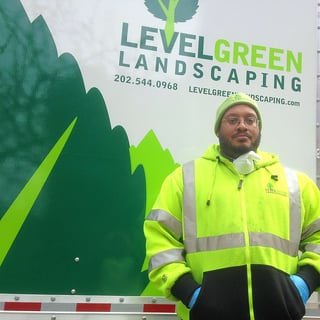 “Once our crews install the flowers, I get to watch them grow to their full potential,” Robby says. “I get to see the results of our work. And say, ‘Hey, we did that. And it looks beautiful.’

“You have to have patience,” he says. “You have to stand there for a while, watering for a long enough period of time for the roots to really soak up the water.  And I’m a patient person.”

He takes his work seriously.

“I’m responsible for the finished product,” he says.  “If I don't water enough, the flowers won't look good and the customers won’t be happy.”

He’s proud to hold up his end.

“He’s a solid guy,” Bradley says. “Everybody likes Robby. He’s dependable. He’s a good communicator. He visits the same sites two or three times a week, so he’s the first one to notice if any of the flowers need attention.”

Some annuals are susceptible to fungus and diseases, Bradley says, and need a skilled eye to monitor them.

“Robby keeps an eye out,” he says. “I can trust him to make smart decisions. If it rained recently, he can test the moisture content of the soil. If a property doesn't need water that day, he goes back the next day. He doesn't waste client money on services that aren't needed.”

Robby shares his home with his wife, Jewel, and kids 12-year-old Amaya and 3-year-old Robby Jr. His oldest son, Rolandous, attends Stevenson University in Maryland, where he's on the football team.

Robby has coached youth football for 12 years. The youngsters he started out coaching are off to college or careers now. He’s loved watching them grow.

“Football teaches you about life,” Robby says. “It teaches you teamwork, determination. And it keeps you out of trouble. When kids come back to see me and say, ‘Hey, Coach Robinson, I graduated,’ that’s a great feeling.”

The football coach has an artistic side. Robby fills sketch books with comic book characters, scenery, the faces of people he’s met. He paints, too, in watercolor and acrylic, and several of his paintings hang in his home.

He’s a fan of “Sons of Anarchy,” the TV show following the lives of a close-knit outlaw motorcycle club operating in California's Central Valley. Robby can tell you all about the show’s themes of brotherhood, loyalty and redemption.

The fact that they ride motorcycles is pretty cool, too. You’ll often see Robby on his Suzuki 1300 Hayabusa.

Robby came to Level Green with some landscaping experience. His dad owned a landscape business for a while and Robby helped out. He’s also had jobs in shipping and receiving.

This job is a great fit, he says.

“One of the things I like best about Level Green is the people,” Robby says. “I get along with everybody.  And you feel appreciated here. When Brad asks me to do something, he always says thank you. He tells me he appreciates it. That means a lot.”

Robby is just one of the dedicated team members we have here at Level Green Landscaping. And we’re always looking for hard-working, talented people to join our team.

Are you ready to work for a company where employees feel valued and appreciated?