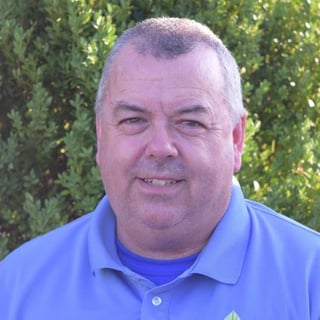 Sometimes, it’s the little things that make you feel good driving home at the end of the day.

Scott Rupert has worked on sprawling commercial enhancement projects and luxury, high-end residential landscaping, but it’s a simple M created from flowers that he mentions when he tells of the rewards of his work.

On the campus of the University of Maryland, a Level Green Landscaping client, is a giant M created entirely of flowers. Crews plant the striking floral M, in a circular sea of emerald green lawn, with 1,000 sturdy red begonia plants in the spring, and swap it out with 1,000 cheerful yellow pansies each fall.


“That M is a very popular place to stand in front of and have mom and dad take your picture,” Scott says. “It's neat to see folks stand next to it with their buddies and get their picture taken, and know we have a part in that.”


Scott, an account manager, has worked at Level Green Landscaping for six years, after three decades in the landscaping business at companies around the country.


He worked with Level Green co-owners Bill Hardy and Doug Delano years ago at Ruppert Landscaping. (No relation— note the number of p’s.)


He graduated in 1985 from the University of Maryland with a degree in horticulture, then got a full time job at Ruppert, where he had worked part-time during school.


But his landscape experience goes further back than that. He was one of those kids with a lawnmower who knocked on neighbors’ doors.


“I canvassed the neighborhood looking for people with tall grass,” he says.


This job suits him.


“It enables me to get out into the field, walk projects, check on materials and the status of the job,” Scott says. He has an eye for detail.


“Do we need to pay more attention to the left side of the building? Do we need to trim the shrubs? Do the beds need weeding? Do the maple trees by the front entrance need replacing?


“What I like is that I'm not tied to an office,” he says. “I like being outside.” Allow him to clarify that.


He loves sizing up a property and figuring out what  enhancements it needs to really soar.


“It's almost immediate gratification,” he says. “You step back, and realize how much better it looks. Maybe the new flower bed really picks things up.


“It gives you a smile at the end of the day,” he says. “You realize, ‘I really did make a difference.’”


Need Anything At Home Depot?


“Scott is a very dedicated employee,” says Scott’s supervisor, division manager Paul Wisniewski. “He'll pretty much do whatever is necessary, whenever is necessary. He'll help anybody out who needs it.”


That might mean working on his day off, or on a Saturday.


Scott’s experience in the construction side of the business gives him great insight, whether on a hardscape project or an enhancement proposal, Wisniewski says, and he’s always happy to lend his expertise.


And if you need anything at Home Depot, Scott’s your guy. He takes some good-natured ribbing, Wisniewski says, about his frequent trips there.


The family’s 10-year-old black lab, Duke, is up for any adventure, whether it’s a hike along the Potomac River or a quick trip in the truck to Costco.


Scott unwinds by watching cooking shows on The Food Network or episodes of “This Old House” on PBS.

So, does he cook?


Mae is from Puerto Rico, and Scott is fluent in Spanish.

His second language comes in handy when he needs to communicate with Level Green’s mostly Hispanic crews.


“I enjoy that part of it, when I get to interact with the crews,” he says. “It enables me to get beyond just, ‘Hello, how are you doing?’”


Scott has worked enough places to note the difference between a company that’s all about the bottom line and one that really cares.


“I like the direction and focus that Bill and Doug put on values and how they run the business,” he says. “Treating customers right.”


He believes in the company motto: “Do the right thing.”

“Not just on the job,” he says, “but in daily life, it helps to stop for a second and remember that.”


Want to Join the Team?


Scott is just one of the dedicated team members we have here at Level Green Landscaping. And we’re always looking for hard-working, talented people to join our team.


Are you ready to work for a company where people really believe in doing the right thing?