Walter Munguia has “manager” in his title, but he still gets his hands dirty. You’ll find him on a paver installation job with his laser level, painstakingly measuring to be sure the base is level before any pavers go down.


“I check the grading first,” says Walter, operations manager for construction at Level Green Landscaping. “If the grading isn't right, the pavers will be too low in some areas, too high in others. It has to be exactly right.”


Walter has been with Level Green Landscaping almost a year, after working for several years at a landscaping company in Richmond, Va. That’s where he met Paul Weaver, now Level Green construction branch manager. 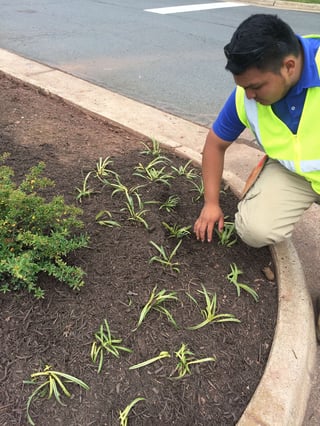 “When we worked together in Richmond, I noticed Walter right away,” Weaver says. “He listened better than everybody else, he learned quicker than everybody else and he has more ambition than the average guy. My first thought when I came to Level Green was to bring Walter here to run my division.”


Walter’s love of this work started in high school, when he worked on weekends for his uncle, who owned a small landscaping company. While he took some plumbing classes in high school, that work didn't click, he said. Landscaping did.


On a recent day Walter was headed to a large patio paver project at a condominium development to check on his crew’s progress.


“It’s Monday,” he adds, “so I’ll make sure the guys are starting off with a good attitude. That’s part of my job, too.”


There’s a lot to Walter’s job. He orders the materials for each project. He plans the crews’ schedules and lets them know what they’ll do each day. He tracks the hours on each project. He does the final inspection of each job to make sure it’s perfect.


“I can show Walter a plan, a detail, a specification, and after just a couple minutes, he has it in his head and he takes care of it,” Weaver says. “He’s trying to learn my job. He watches what I do, what the other branch managers do, so he can improve his skills, every day.”


Meanwhile, Walter trains his crews so they improve every day, too, Weaver says.


“He’s not the kind of guy who sits in his car and watches,” Weaver says. “Walter gets his hands dirty every day. He jumps on a piece of equipment, grabs a shovel, grabs some pavers and does the work as he shows his guys how to do something. Other managers in the company go to Walter for construction advice.”

A key piece of Walter’s advice? Be flexible. 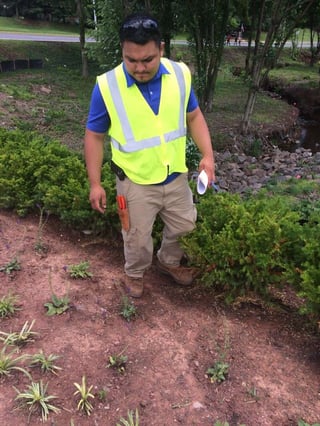 “The schedule can change like crazy,” Walter says. “Maybe we’re scheduled to start on a job July 1, but we get a call that we can't start until two weeks later. So I have to change things around. I have to give my guys work to do. They have families to take care of, just like I do.”


That family is his fiancee, Olga, and their two daughters, Greidys, 6 and Leslie, 2. Walter loves taking his girls to the park, maybe kicking around a soccer ball. He still has some moves from his days playing on a team in high school.


Walter spends his time off doing pretty normal stuff, he says: mowing the lawn, maybe making spaghetti for supper. “It’s the first thing I learned to cook,” he says.

He saves the pro kitchen skills for when his mom visits. She makes him pupusas – the national dish of their native El Salvador. The hand-made tortillas are stuffed with beans, pork and cheese.


“I live day by day,” Walter says. “I like every day that I go to work. I like seeing the progress of a project from the beginning to the middle to the end. I like taking pictures at the end, and seeing my guys proud of what they've just done.


“I don't see my job as just a regular job,” Walter says. “I see it like a career, and at Level Green, they help with that. They give you the tools you need, they send you to classes to get certifications. Not all companies do that.”


Walter looks for tips on improvement from all over — including from his crews.


“I’ll ask them what I could be doing better,” he says.

What do they suggest?

Kidding aside, Walter says his plan is to add to his skills and eventually move up in the company.


Walter is just one of the dedicated team members we have here at Level Green Landscaping. And we’re always looking for hard-working, talented people to join our team.


Are you ready to work for a company that helps you advance your career?