The menu at Applebee’s restaurants is packed with choices, but it couldn’t keep William Urquilla’s interest when he worked there as a cook.

“It was a little boring,” he says. “Every day was the same.”

Why switch to landscaping?

“Why not?” he says cheerfully.

William is one of those guys who’s up for anything.

“Every Job is Different”

William started at Level Green seven years ago as a crew member and has earned steady promotions along the way, to driver, assistant supervisor, and now supervisor.

He works in the enhancements division, so he’s all about improving properties with the beauty of flowers, trees, shrubs and the value of hardscape like paver patios and retaining walls.

“I love hardscape work,” he says. “It’s not the same every day. Every single job is different, and you use different ideas. And when you’re done with a project and you look at it and see how you did, it looks nice.” 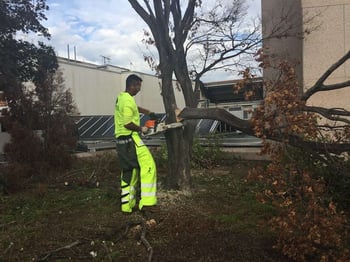 William’s work is on display all over the DC area, from the University of the District of Columbia to the German Embassy to the Franciscan Monastery, where the impressive landscaping and expansive gardens are among the top reasons tourists visit the popular site.

He and his crew are on full fall flower patrol, installing bright pansies and violas and ruffly ornamental cabbages and kale to brighten properties for autumn.

He loves the customer feedback.

“After we install flowers in all different colors and designs, people say, ‘Wow, that looks amazing.’ It’s like a good surprise.”

William loves spending time with his girlfriend, whether it’s a bike ride around a local park or a recent trip they took to Shenandoah River State Park, where they admired the rolling, mountainous views and scenic rivers and trails.

He invites his crew members over for dinner on some weekends, putting those Applebee’s cooking skills to good use.

“We All Work Together” 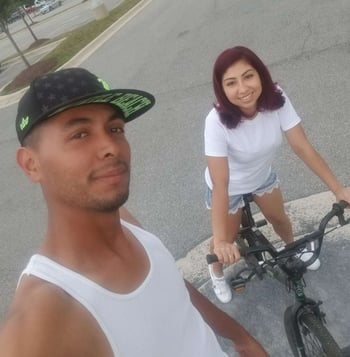 Technically, he’s a supervisor, but William says he’s one of the guys.

“We all work together, and nobody works harder than anybody else,” he says.

They work hard, but they have fun, too, he says, sharing stories about their families, vacations and weekend plans.

He knows firsthand that at Level Green, hard work pays off.

“In the seven years I’ve worked here, I’ve had a lot of opportunities,” William says. “I like it when they say, ‘I have a challenge for you.’”

“He’s not scared of any project,” Sarno says. “He crushes it. And he loves surprising me by telling me, ‘We’re done — what’s next?’”

William and his team often complete jobs in less time than was planned and finish below budget, he says.

“He’s got a really great attitude and he enjoys his work,” Sarno says. “He’s a real asset to the company.”

At the end of the day, how does he feel?

“Tired,” William says with a laugh. “But then I get something to eat and after a couple hours I’m relaxed again.”

He loves his work, from updating properties with fresh new trees to the artistry and challenge of intricate paver installation.

The results are his reward.

“I like to make a good impression,” he says, “so our customers are happy.”

William is just one of the dedicated team members we have here at Level Green Landscaping. And we’re always looking for hard-working, talented people to join our team.

Are you ready to work for a growing, successful company that encourages its employees to grow and move up?