The expansive ninth floor patio at the Washington DC law offices of Steptoe and Johnson gets a lot of use.

Attorneys gather at outdoor tables and work on briefs, soaking up a bit of sun. 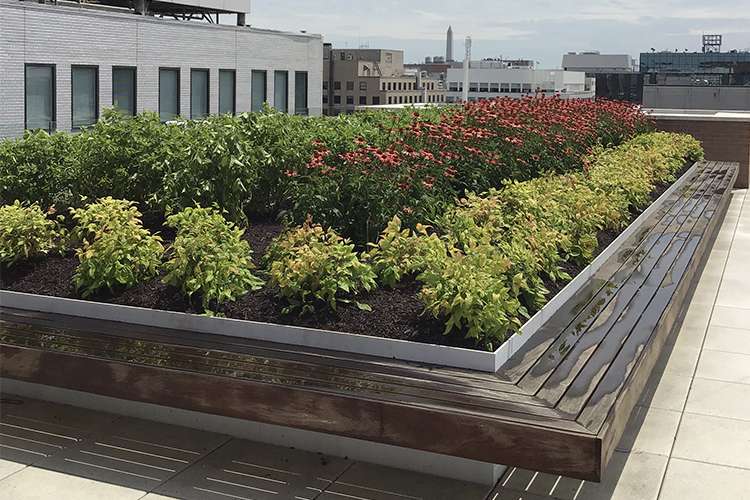 And the company’s annual July 4 party brings 300 or more employees and their families to the outdoor space to enjoy live music, food and holiday mingling.

So when facilities manager for U.S. offices Vince Falcone noticed the patio’s 50 Knock Out roses looked wilted and diseased, he needed a solution fast.

How Soon Can You Get Here?

Falcone sent Rill some photos of the roses. How soon could he come take a look?

Rill would be there Monday morning, but he diagnosed the problem as soon as he saw the photos.

Stunted growth, curled leaves — it was rose rosette, the latest rose virus confounding experts, and slowly infecting even roses that have been bred to be disease resistant, like the Knock Out variety.

The only solution is to dig up infected plants and dispose of them.

While all the infected rose bushes had to go, as well as some failing ground cover, Rill could save the healthy purple coneflower, already in beautiful bloom, as well as some existing ornamental grasses.

Rill explained the situation to Falcone and showed him some options to replace the infected roses.

Rill offered Falcone three options for plant sizes. The bigger and more mature the plant, the higher the cost. Falcone chose mid-size plants and Rill wrote up a proposal for Falcone to sign.

The installation would have to be done on a Saturday, Falcone explained, as the patio is adjacent to an employee cafeteria that’s bustling on weekdays.

Normal turnaround for a job like this is two to three weeks, Rill says.

Back at the office, Rill got a phone call from Falcone with an unexpected twist: They needed the work done that Saturday.

“The patio is part of our work environment,” Falcone says. “We didn’t want to wait two or three weeks.”

He faced an immediate dilemma.

They had already been told they wouldn’t have to work that Saturday.

Rill couldn’t require them to work. So he asked for volunteers.

“That says a lot about our crews,” Rill says.

Now For The Tough Part

Rill discovered that Saturday was DC’s big Pride Festival, so it would be even tougher than usual to navigate big landscaping trucks through city traffic.

Steptoe offices are in a high-end building, and the freight elevator they needed to use to transport 50 shrubs, soil and all their tools to the ninth floor opens into a fancy lobby.

They would have to cover the floors to protect them from dirt and scratches.

“Any rooftop planting is difficult,” Rill says. “The first challenge was getting 100 plants up to the ninth floor patio.”

They had to make sure they brought carts short enough to fit in the elevator.

Complicating matters: the elevators were being serviced that day. So they had only short, 20-minute bursts when they could use them. 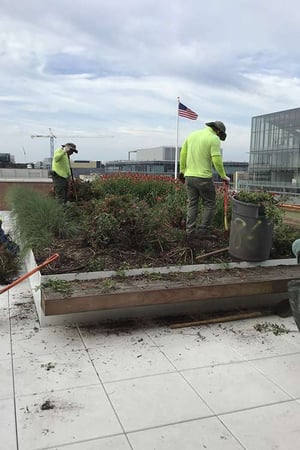 Level Green crews removed the diseased rose bushes, bundled them up tightly in tarps and carried them down to their trucks on their backs.

They left the beautiful purple coneflower, all in bloom, as well as the healthy ornamental grasses.

Rill also added nandina to the planter, a semi-evergreen that needs little pampering and adds striking red foliage to the planter landscape in the fall.

Crews removed about 100 failing plants in all and added about 200 healthy new ones.

From the signing of the contract until installation typically takes 15 days, Rill says.

The patio planter had existing drip irrigation, but that’s not enough to keep plants fully hydrated in hot city summers. So Steptoe signed a year-long maintenance contract with Level Green to cover watering.

Sensors tucked into the planter’s soil tell him instantly — from miles away — the moisture content of the plants’ soil. He can see in real time when it needs water, so he can send watering crews out only when needed.

“I Score Them An A-Plus” 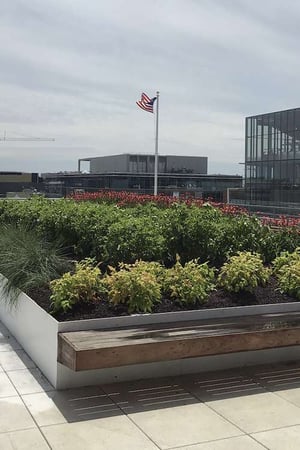 Falcone knew his project was a challenge, especially the tight deadline.

“What I was asking was next to impossible,” he says, “but Corey made it happen.

“He came up with some good ideas. He showed me what the plants would look like now, in six months and when they’re fully mature, and he gave me prices.

“Corey was very knowledgeable,” Falcone says. “But what really impressed me was that every time I called, the guy picked up. So often you get voicemail that they’ll get back to you within 24 hours.”

On the Saturday of installation Falcone stopped up to check on the progress.

“Corey was there,” he says. “He took time out of his weekend to make sure everything went smoothly.

“I score Level Green an A-plus.”

“Here’s What Our Company Can Do”

“The landscaping looks like it’s been there three or four years,” he says. “It’s nice to see such immediate impact.”

The new plant combinations will offer beauty and interest right into fall.

“It’s always a nice feeling to see the turnaround,” Rill says. “It turned out even better than I thought.”

He gives credit to his dedicated crew.

“Knowing that the guys were willing to step up and come in on another Saturday — that’s above and beyond average,” Rill says. “It says, ‘Here’s what our company can do.’

“To see the finished product turn out as well as it did, and then turn into a long-term relationship with the client, is really satisfying,” he says.

“I always tell the guys, ‘You never know who’s watching, who you’re impressing, what it might turn into.’” 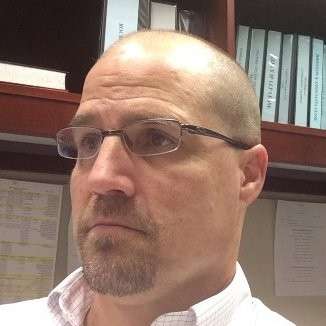 "What I was asking was next to impossible, but Corey (and Level Green) made it happen. He came up with some good ideas. He showed me what the plants would look like now, in six months and when they’re fully mature, and he gave me prices. Corey was very knowledgeable, but what really impressed me was that every time I called, the guy picked up.”