When Corey Rill was in college at Virginia Tech, he had two majors. One was turf grass management. The other was ocean and aerospace engineering.

“One math problem took six hours,” he says of the engineering classes.

When it was time to settle on a career, he chose grass. It’s worked out pretty well.

Now, as account manager at Level Green Landscaping, Corey tends to some pretty nice turf. But there’s so much more. 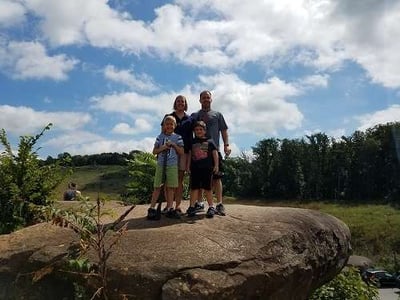 “I had never played golf in my life,” he says.

Suddenly, golf was his life. At least, the course was.

“There’s no room for error on a golf course,” he says. “Everything has to be perfect, all the time. We were growing grass under one tenth of an inch high in pure sand.”

No sprinklers — he watered everything by hand.

“From the outside looking in, you’d think taking care of that turf would be the same as any commercial turf,” Corey says. “But it’s not.”

Along the way, he came to appreciate landscaping, too.

The hours in his industry were brutal, so once Corey started a family, he moved to work in residential landscaping in the Annapolis area before starting at Level Green a year ago.

Childhood On The Farm

Corey’s interest in the outdoors goes back as far as he can remember. One grandfather ran a cattle farm. The other grew vegetables and irises that he sold on the side of the road.

Corey grew up picking sweet corn and working for a neighbor’s produce stand.

“I always enjoyed being outside,” he says. “I spent my time playing in the woods and in streams, just figuring out stuff to do.

“I knew I didn’t want to sit in an office all day.”

His work as account manager at Level Green is a great fit, Corey says.

“I like the mix of being inside and outside,” he says. “I like listening to clients. I like that puzzle of helping them get the best landscaping they can, with the budget constraints they have.”

There’s always something new to keep him on his toes.

“It’s a constant learning curve, and I love that,” he says. “There’s always a new pest, new plants, new strategies.”

He enjoys the people part of his job, too.

“I like developing relationships with clients, knowing I can be a person they can rely on for information.”

“He sees things the average person might not notice on a site,” Kole says.

And he brings an energetic dynamic to the team, he says.

“Corey’s a go-getter — he’s constantly on the move,” Kole says. “But he’s also always willing to help everyone else out, whether it’s helping a new employee with estimating or giving advice on turf grass, which he knows so much about.”

Clients appreciate his frequent communication, Kole says.
“If he’s taking longer than usual on a proposal, he tells them exactly what’s going on,” Kole says, “whether he’s waiting for prices from a vendor or waiting for it to be reviewed. So the client isn’t out there guessing where their proposal is.” 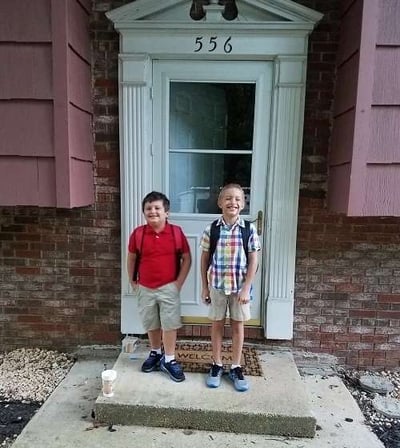 “They’re loud and crazy,” he says with a laugh.

He and Amy, who teaches high school German and Spanish, own a 38-foot trailer with plenty of perks. That’s not just camping. It’s glamping — camping with a lot of nice amenities.

They travel with a handful of other families to Harpers Ferry, Gettysburg, Ocean City.

“I really enjoy the camaraderie of the coaches and the other officials,” he says. “There’s a different mindset to officiating wrestling. It’s also kind of a way to give back.”

Corey’s job keeps him hopping. He’s fine with that.

“Instead of working at one 100-acre facility all day, I have 97 properties,” he says. “From three city street beds downtown to a large university, from the German embassy to a large HOA. I’m constantly changing my thought process to meet all the different needs.”

Along the way, he loves the support he gets from Level Green.

“I love that Level Green understands that if you have a family, things pop up that you have to take care of,” Corey says. “They give you all the tools and training you need to succeed. I’ve never worked for a company so willing to invest in their employees to help them be the best they can be.”

Corey is just one of the dedicated team members we have here at Level Green Landscaping. And we’re always looking for hard-working, talented people to join our team.

Are you ready to work for a strong, growing company that really invests in its employees?