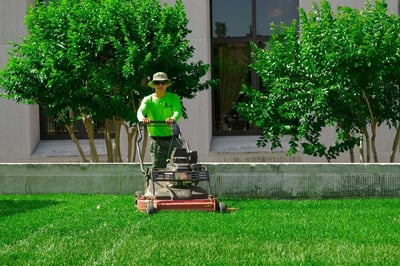 Level Green Landscaping’s longtime motto, “Do the Right Thing” has even more meaning now, as the company begins to move from gas-fueled to battery-powered mowers, blowers, weed-eaters and shears.

It’s great news for customers striving to be as green as possible.

Michael Mayberry, chief technical officer at Level Green, shares what the switch means for the company, its customers and the environment.

“We want to be on the cutting edge of this,” Mayberry says. “Very few companies are doing it now. It’s a good time to start, because the tech is starting to catch up to our needs.”

Making the choice between gas vs electric-powered landscaping equipment has been a struggle, he says. Battery-powered equipment hasn’t offered the power or durability that gas-fueled equipment does.

“There hasn’t been enough power to spin the cutting surfaces fast enough to cut well,” he says.

“It’s the right thing for the environment, and for our customers,” Mayberry says.

“That might not seem like a big thing, but think about our gas emissions from blowers and mowers, then multiply that by all the landscapers around the world,” Mayberry says. “As we all start to make this shift, it will be good globally.”

Battery-powered equipment is easier to operate and maintain.

No more gas engines to maintain, so no oil, air filters or spark plugs to change.

“We don’t have to teach crews how to properly mix and handle fuel on this new equipment,” Mayberry says. “There’s no engine oil, so there’s less chance of burning up an engine because you didn’t do the proper maintenance.”

“Some states and cities are imposing noise regulations,” Mayberry says. “DC hasn’t yet, but we want to be respectful of other people.”

That’s good news for customers who won’t have to hear loud equipment outside their windows when crews are on the job.

Large-scale mowers powered by battery are still two or three years down the road, Mayberry says.

“We’re trying to get in now so that we’ll understand all the intricacies when we move to the larger pieces.”

Also on the horizon: robot mowers that can mow grass by themselves, overnight.

The two DC crews starting Level Green out on this electric-powered adventure are excited to pave the way, Mayberry says.

“There’s a sense of pride that we can advertise ‘this is a green crew,’” he says. “It’s exciting.

“The quality of work is the same,” he says. “We’re able to produce the same quality with less environmental impact. We’re trying to do our part.” 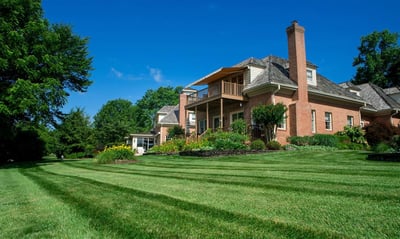 When you consider gas vs electric-powered landscaping equipment, the choice for the earth is clear.

We’re excited to take this next step in environmentally friendly landscaping.