Winter’s wrath might seem months away, but it’s time to think about brining now.

Will your parking lots, walkways and entrances be slick danger zones, or clear, safe passages for your customers, tenants and employees?

Brining can make the difference.

What exactly is brining? How does it work? Why do you need it?

James Kole, branch manager at Level Green Landscaping and a true brine believer, fills us in.

So, What Exactly Is Brine? 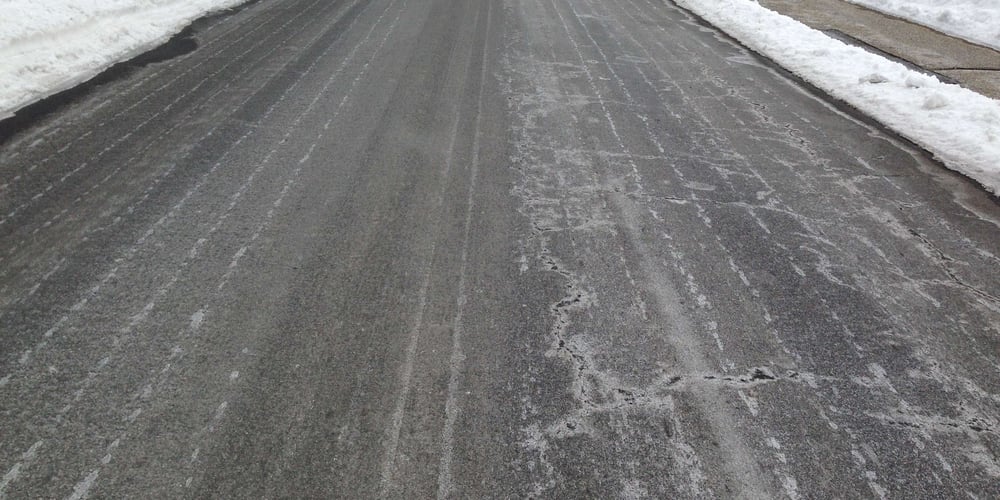 Brine is a liquid mixture of water and salt that’s sprayed on roads, parking lots and walkways, usually before a snow or ice storm to prevent snow and ice from sticking.

It’s applied from truck-mounted tanks with nozzles that can spray a swath of brine as wide as 16 feet, Kole says. Hand-held hoses allow crews to spray it on sidewalks, too.

When is brine a great idea? It all starts with an eagle eye on the weather forecast. Certain conditions keep brine from working.

If rain is expected before the snow or ice moves in, it would wash away the brine, so there’s no sense in applying it, Kole says.

If the temperature is below 20 degrees, the brine would freeze.

If the air temperature is right, but the pavement is too cold, brine will freeze, so crews use hand-held infrared instruments pointed at the ground to gauge the ground temperature.

And if the snow moves in quickly, with little or no warning, there’s not enough time to apply brine first.

But if there’s at least 24 hours’ notice and the temperature is between 20 and 30 degrees, Kole says, conditions are great for brine.

“Last winter we used it during about 80 percent of the storms,” Kole says. 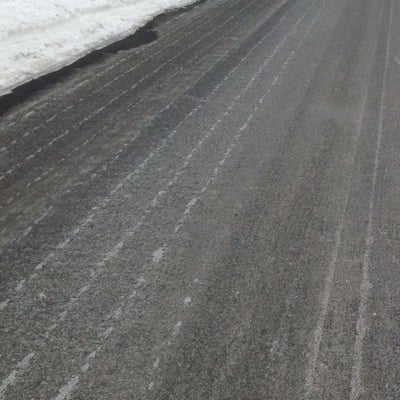 Are you used to using salt to melt ice? It has drawbacks. Salt doesn’t work until the snow or ice starts to melt and it mixes with that liquid and activates.

If it’s really cold, salt just lays on top of the snow and gets blown around. It takes a while to work.

But brine is already in solution form, so as soon as crews spray, it gets to work.

Brine starts melting that first inch or two of slippery snow right away and keeps it from sticking around. That’s a huge safety bonus for your property.

Brine is easy to apply, too, and it doesn’t stick to shoes and boots and get tracked into buildings the way rock salt does.

While salt blows around, brine stays where you put it.

If just a small amount of snow falls, brine can be applied both before the snow falls and again on top of it, Kole says, and that may be all the treatment needed.

Be Kind To The Environment With Brine

You may have heard about the harmful effects of salt on the environment. It makes its way into area lakes and streams, jeopardizing the creatures who live there.

Traditional salt can burn surrounding landscaping, too, Kole says, but brine is gentler on plant material.

Brine uses one quarter of the amount of salt as traditional rock salt, so it’s gentler to the environment.

One truckload of brine equals four truckloads of salt. You can treat a larger area with less salt per square foot.

Level Green crews use salt brine to pre-treat pavement before a storm and an ice melt mixture on surfaces before and after snow or ice arrives.

Using a mix keeps clients covered, no matter what Mother Nature dishes out.

If you want brine as part of your winter snow and ice management, talk to your Level Green account manager now, Kole says.

“Don’t wait until the day of the first storm,” he says.

At Level Green Landscaping, we provide snow and ice management for our clients that we already service throughout the year.

We know how dangerous winter weather can be for our client’s residents and visitors. Our goal: protect everyone who spends time on your commercial property and minimize your organization’s chance of being exposed to snow and ice-related hazards such as slips, falls, traffic accidents, and property damage.

We’d love to hear from you — before winter blows in.