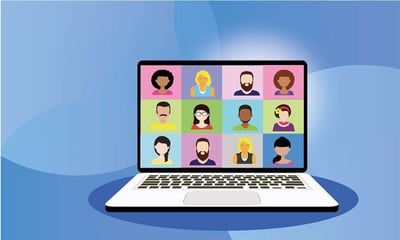 You might think a virtual meeting with 27 faces sharing a screen would be chaotic, at best.

It was a great way to introduce ourselves to the company and offer a fascinating educational topic: how climate change is affecting the landscape and turf industry.

The virtual lunch and learn was a big hit, says Gabriel Hammond, director of corporate programs for Legum & Norman.

“People were curious and intrigued,” Hammond says. He laughs. “They wondered, ‘How will they do lunch?’”

Not to worry. Level Green sent each participant a GrubHub gift card to order lunch at their leisure.

That was a nice touch, Hammond says. In fact, the whole experience was surprisingly great.

“We do a lot of lunch and learns with our vendors, always in person at our training center,” he says. “But having one in this way was so clever. I think it was more successful than our previous lunch and learns.”

“We manage properties all over DC, Maryland, and Virginia, so many of our on-site managers can’t attend most lunch and learns,” Hammond says. “They have to leave their jobs in the middle of the day for two hours, by the time you add the driving time.

“This time, all they had to do was log in and join online. That was very beneficial for managers who don’t typically get to attend.”

“Most landscaping companies offer the usual topics — how to bid on a landscaping contract, what plants are good for our area, things like that,” he says.

He discovered the topic in a blog post on the Level Green web site and was intrigued.

“We had never heard anything like this,” Hammond says. “It was so interesting.”

The only drawbacks were a couple technical glitches with the presentation, Hammond says.

Hammond says the experience went so well, he’ll be incorporating more virtual lunch and learns in the future.

“Maybe we’ll do a hybrid,” he says. “We’ll have a lunch and learn at our office, but broadcast it, so others can join in from wherever they are.”

The Beauty of a Virtual Meeting

The event’s success is great news for Michael Mayberry, chief technology officer for Level Green, who sees virtual meetings as a key part of the landscaping business moving forward.

You can’t beat the convenience.

Virtual meetings work for a host of purposes, Mayberry says, from discussing contract proposals to pitching enhancement ideas to just checking in with customers to see how things are going.

“You can talk about anything you’d talk about in person,” Mayberry says.

Pro Tips From the Tech Guy

Don’t forget the value of networking — another great use for a virtual gathering.

A virtual meeting can be just as personal as an in-person gathering, Mayberry says.

Sometimes even moreso, when participants get a glimpse into their colleagues’ homes and maybe even meet their interloping pets.

“Everyone has things around them that are reflections of themselves,” he says. “You’re allowing people to come into your life a little bit.”

Hop on a Virtual Meeting with Level Green

As much as we love seeing our customers in person, that’s not always convenient.

Feel free to chat us up at a virtual meeting. You’ll get the information you need, and we’ll still get to see your smiling face.

Contact us at 202-544-0968. You can also request a free consultation online to set up a virtual meeting.