When David Briggs needs to talk to you, he could text, email, or pick up the phone. But chances are, he’ll stop by to see you.

He’s that kind of guy.

“I like my customers,” says Dave, an account manager with Level Green for the last 12 years. “I like meeting new people, seeing new things, not being stuck in an office.”

No offense to you office types. But being outside is what drew Dave to a career in landscaping, way back in high school when he tried it out as a summer job.

“When I was young I wanted to be outside, be tan and I didn't mind the heat,” he says. He went on to start a landscaping company with his older brother, Paul. He signed on at Level Green almost from the company's beginning.

Dave’s job as account manager is multi-faceted, but it boils down to a couple key things: making sure the customers are happy, and making sure their properties’ landscaping is appealing, healthy and impressive.

“There are different challenges every day,” he says. Some days he does site visits, making sure crews did everything just right. He carries a quality inspection checklist:  Are the mowing patterns right? Edging done? Weeds removed? Shrubs pruned?

“I’m a fresh set of eyes,” he says. While he’s there, he looks for potential improvements — maybe a new flower bed, or a patio for employees to gather —  then shares his ideas with the property manager.

He meets Level Green landscape designer Shelley Russell at property sites to discuss plans for new installations. A couple times a year he does an inventory of clients’ plant materials, taking note of what’s declining and needs to be replaced.

Along the way, Dave builds relationships. David Roles, Dave’s supervisor, sees it every time they visit a customer together.

“As soon as we walk in the door, you hear, ‘Dave’s here!’” Roles says. “They love him. They tell me how lucky we are to have Dave, and how great he is. He takes a genuine interest in people.”

But don't let the friendly conversation fool you. Dave is no-nonsense when it comes to getting the job done.

“He has a sense of urgency,” Roles says. “When customers need a quick turnaround on something, he puts in extra effort to meet that need.”

“We have a really high renewal rate,” Dave says. “That means the clients are happy. That’s important to me. When customers want something done, it gets done.” He always carries a notebook, so he can jot down customer comments and requests.

Away from work, you might find Dave at a major league baseball game. He and his brother travel to a different city for a game each year. He’s a Washington Nationals fan, but has cheered on teams at ballparks in Boston, Chicago, Cleveland, Pittsburgh, Philadelphia and more. Up next: St. Louis.

He loves spending time with his three grown daughters, Lauren, Sarah and Erin, and his 2-year-old grandson, Avery David. Each summer they travel together for a family vacation to the Outer Banks.

Closer to home, he recently bought a 1940s-era house and has been fixing it up, from kitchen to basement to a new deck. So what does he cook in his spiffy new kitchen?

“Whatever takes two minutes or less,” Dave quips. He loves watching other people cook, though. He’s a fan of “Chopped” on the Food Network. Or he might unwind with a couple hours of “Law and Order.” 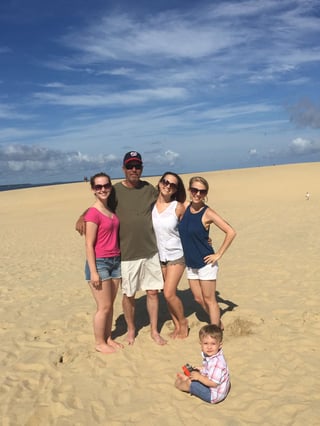 Dave’s twin brother, Tom, lives just a block away. They have a special bond, even though they used to beat each other up for entertainment. They even chose the same cell phone passcode.

“I like getting to know clients, building relationships,” Dave says. Why does he want to do his work at Level Green?

“They do the right thing,” he says. He tells of a time crews mistakenly sheared a customer’s boxwoods too closely. He told Level Green co-owner Douglass Delano about it.

“I could have told the customer, ‘Don't worry — they’ll grow back,’ but as soon as I told Doug about the boxwoods, he said, ‘Replace them.’ We kept that client another five years.”

Dave is just one of the dedicated team members we have here at Level Green Landscaping. And we’re always looking for hard-working, talented people to join our team.

Are you ready to work for a company that does the right thing?