The National Harbor waterfront area just south of Washington DC offers a dizzying array of entertainment choices, from the Capital Wheel, a 180-ft. Ferris wheel with views of the Potomac River, to the glitzy MGM resort and casino.

But everybody loves to shop, so the Tanger Outlets at National Harbor is a huge draw, attracting millions of customers each year.

That’s millions of eyes on the property’s landscaping.

It has to look great.

“Right Smack In The Middle Of It All”

Tanger Outlets National Harbor is one of the company’s flagship shopping centers. Shoppers flock for great deals on Armani, West Elm, Sperry, Barney’s New York and more — 85 brands in all.

“We get a mix of international shoppers, local customers and tourists,” says Isida Konda, assistant general manager of Tanger Outlets National Harbor. “It’s a very dynamic market that brings us a lot of success.”

Outlet shopping centers are often miles away from big cities, she notes.

“Because we’re close to an urban center — we’re just eight miles from the White House — we’re right smack in the middle of it all,” Konda says.

Landscaping: A Crucial Element Of Success

Tanger’s visitors show up to shop, but they want a beautiful environment, too. So the extensive landscaping done by Level Green Landscaping plays a key role.

“The landscaping is really our only form of decoration,” Konda says. “It makes the biggest difference, by far, in the feel of the place.”

“It separates them from the competition,” says Paul Wisniewski, division manager at Level Green.

“What sets Tanger apart is its great customer experience,” he says. “They really take care of their facility, investing in their landscape. It’s one way Tanger shows customers that they care — and they want them to come back.”

“People take pictures of themselves by the flowers and post them on social media,” Konda says. “We get plenty of positive reviews that say how beautiful everything looks. Level Green does a really outstanding job.”

Stunning drifts of tulips in spring, potted tropicals in summer and festive holiday planters bring the place to life year round, she says.

“Every single shopper is affected by the landscaping,” Konda says. “The landscaping makes the center inviting and welcoming. It gives a sense of comfort that you're surrounded by beautiful living things.” 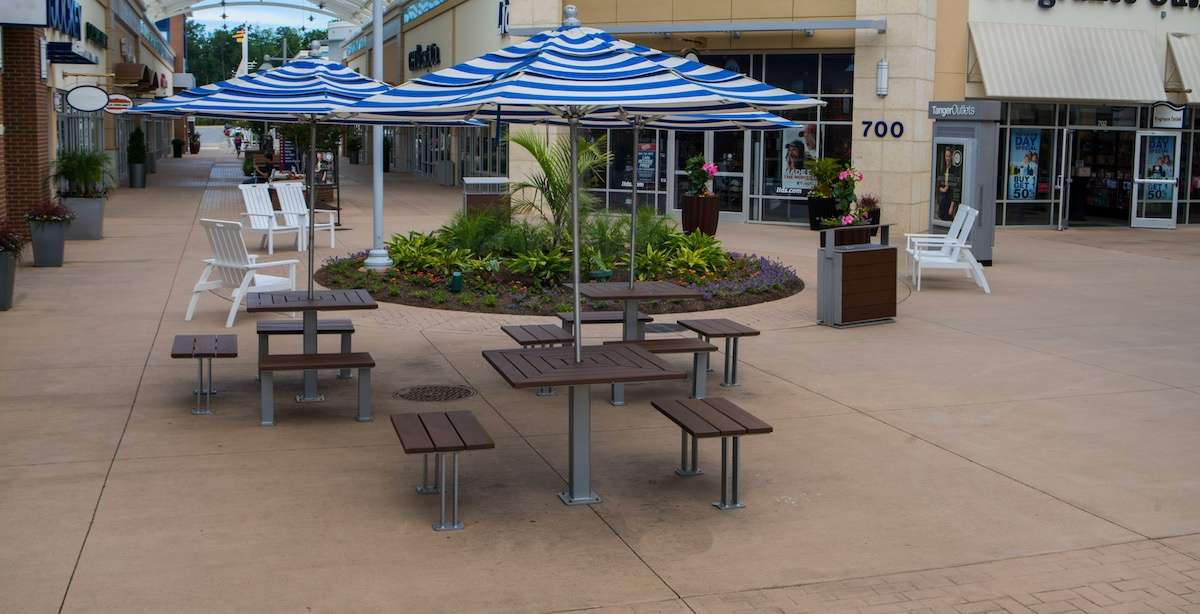 Lots And Lots Of Pots

What do shoppers see?

“There’s a bit of everything,” Wisniewski says.

The shopping center features areas of green grass, islands of grass and trees in the parking areas, a huge landscaped courtyard covered by a roof structure for shade and weather protection.

Don’t try to count all the plant-filled pots — you’ll be too tired to shop. There are 190 planters in all and 90 of them are changed out with new flowers four times a year. The rest are filled with evergreens that look great year-round.

“Most of our time is spent on detail work,” Wisniewski says. “Making sure the flowers are looking good, weeding, checking the irrigation.”

In the fall, crews remove the summer annuals and tropicals and replace them with cold-hardy evergreens, pretty pansies and ruffly ornamental kale.

In March they rotate again, adding fresh pansies, dianthus and dusty miller to complement the bright tulips, cheerful daffodils and allium that sprout from bulbs planted in the fall.

Keeping the thousands of flowers and plants irrigated and healthy is a huge part of the landscaping here.

Each planter at Tanger has its own drip irrigation system, and some of the beds do, too.

When Level Green took over the landscaping here two years ago, Wisniewski noticed many of the pots weren’t sealed properly, so water was seeping out onto the sidewalks, posing a slip hazard and wasting water.

He changed the watering schedule to cut down on leaks, until the pots can be repaired.

Because the plant-filled courtyard is covered by a roof, many of the planters don’t get rain. So Level Green crews sometimes do supplemental watering.

“They’ve had a big impact on our irrigation system,” Konda says. “They’ve saved us money on water.” 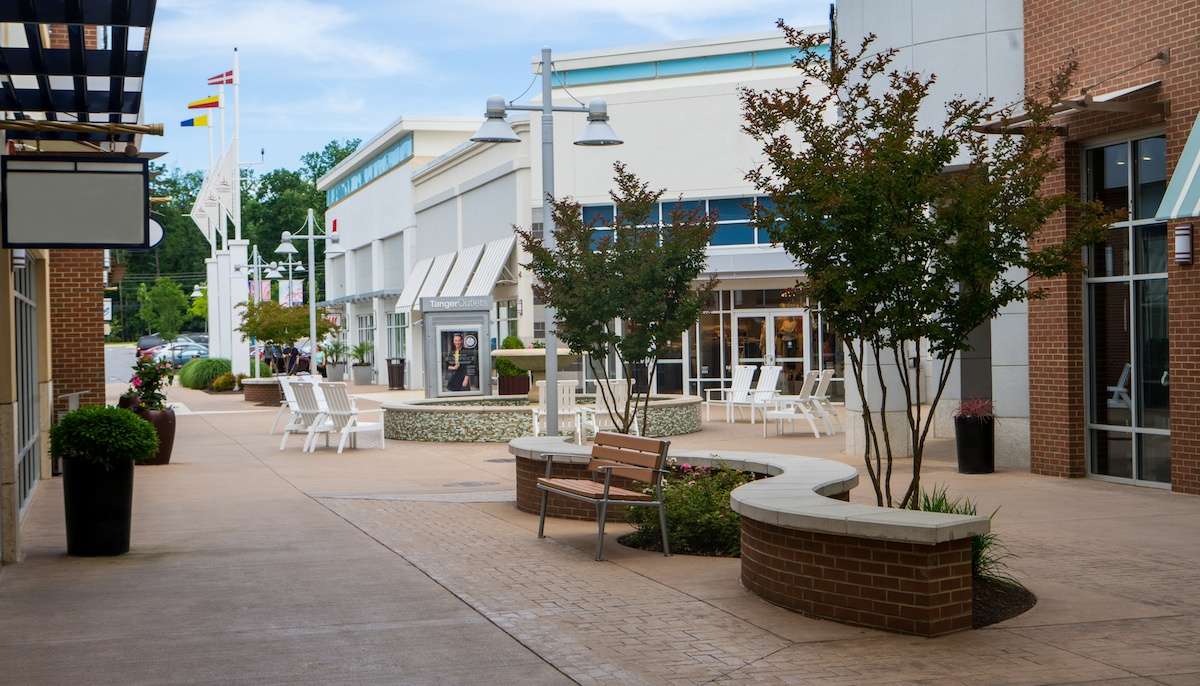 More savings are ahead, Wisniewski says, as Level Green will install a new smart irrigation system with an internet-based controller to manage water flow.

The Challenges Of A Site Swarming With Shoppers

Landscape maintenance is crucial work, but shoppers don’t really want to see it. So Level Green crews visit Tanger on Mondays, Tuesdays and Wednesdays, before even bigger crowds move in later in the week.

“We have to be done out in front before 10 or 11 a.m, before all the shoppers arrive,” Wisniewski says. “Then we move to the exterior areas.”

A five-man crew spends all day on site once a week.

In addition, Wisniewski is on site two to three times a week, walking the property with an eagle eye.

Is the irrigation working properly? Do all the flower combinations pack a visual punch?

When Level Green first arrived on the scene, all the Tanger pots were filled with evergreens — easy care, but pretty boring.

“They switched out a lot of bland, not so colorful pots we had before and made wonderful landscaping masterpieces,” Konda says. “They installed a mix of tall, medium and short plants, with different colors, depending on the season. They really put a lot of thought into our center.”

“There’s Very Little Managing I Have To Do”

“We have a real good working relationship,” Wisniewski says. “It’s a partnership. They’re open with me about how much they have to spend, and I help them figure out how to make the most impact with their budget.”

But they don’t need to talk much, she says.

“We’ve been working together long enough now that Paul already knows what we like,” she says, “often before we even tell him. There’s very little managing I have to do. Paul's really a part of the family now.”

You can even see his influence at her house.

“I was never a gardener before, but Paul brought that out in me,” Konda says. “Now I plant things at home. He made me passionate about gardening.”

“Making The Experience Better For Customers”

“What makes me happy is when Isida says how great it all looks, and tells me about the comments from visitors on the Tanger website,” Wisniewski says.

Comments like “It looks amazing” and “Who's your landscaper?”

“That’s where I take my pride,” he says. “Making the experience better for customers.”

“People take pictures of themselves by the flowers and post them on social media. We get plenty of positive reviews that say how beautiful everything looks. Level Green does a really outstanding job.”