Lindsay Tewell grew up in Calvert County, Md. as a tomboy, exploring the woods and splashing in streams.

So after a stint working as a waitress, it makes sense that she made her way to a career in landscaping.

“My favorite thing is to be outside,” says Lindsay, a supervisor at Level Green Landscaping.

Lindsay has been working in landscaping for about five years, mostly at small companies. She worked her way up, learning new skills, mastering more complicated equipment, taking on more responsibility.

She loves hard work — and the beautiful results that come from it.

“I love making a property really pop,” she says. 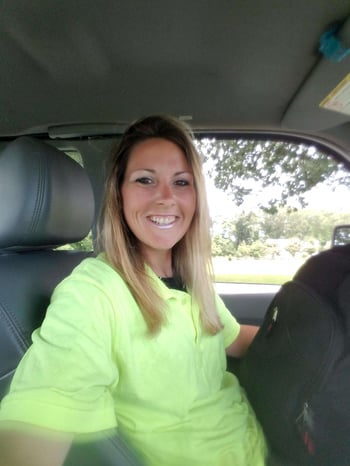 Each day starts with Lindsay taking stock of the day ahead.

“You have to be really attentive to detail,” she says. “Will it be an especially long day? Is it a government property? A school property? You have understand what the job needs. Will we need an edger? Weed killer?

“It’s a lot of work,” she says, “but I don’t mind sweating and I like getting my blood moving.”

She works on a two-person crew, just her and a colleague. “We each do half the work,” she says. “We’re fast. We get the job done.”

“Edging is number one,” she says. “No overhanging grass. No weeds. Everything is mowed to three inches.  Everything has to be blown.”

She loves telling how passersby sometimes ask for a business card, impressed by her work.

“I like making a property look really nice,” she says. “When we’re done, it radiates beauty.”

“She’ll Grow With Us” 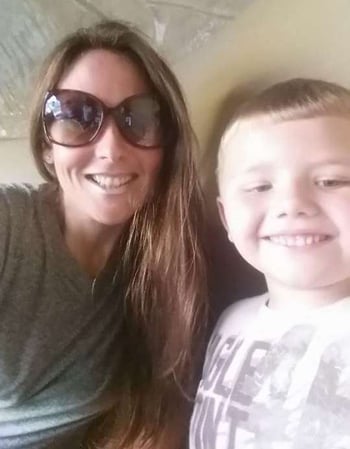 Lindsay got off to a fast start at Level Green, says Brett Hardy, account manager and Lindsay’s supervisor.

“She was doing so well that we promoted her just a couple months after she started,” he says. “She gets the job done in the budgeted time and she does it well. She's always on time. She keeps the crew running smoothly and in an efficient way.”

Part of Lindsay’s job as supervisor is to check in with property managers about any needs they have, keep communication open and keep in frequent touch with Hardy, he says.

“I can’t be everywhere every day,” he says. “A good supervisor makes my job easier.”

Lindsay is in charge of crew safety, too, as well as keeping any passersby safe and walking the property when their work is done to make sure it looks just right.

“I rarely get call backs on her jobs,” Hardy says. “She makes sure everything looks good. Nobody's calling me saying, ‘Hey, Brett, Lindsay missed a patch mowing.”

Lindsay says she hopes to grow with Level Green. Hardy sees that happening.

“I think she'll grow with us, both personally and professionally,” he says.

Hanging With Her Best Friend

Lindsay has a 7-year-old son, Chase.

It helps that she loves the same stuff as 7-year-olds.

And they play a mean game of zombie apocalypse, choosing from Chase's collection of toy vehicles to help ensure their survival.

She’s also a history buff who loves researching ancient cultures. Fascinated by how continents shifted and cultures were born, she soaks up knowledge about ancient Egypt and Mesopotamia.

“I love learning about how we all originated,” she says.

“They’ve Got Everything Together”

After working for a string of small landscaping companies and handyman businesses, Lindsay says she’s happy to be at Level Green.

“They’ve got everything together,” she says. “They take care of their people. They’ve made a good name for themselves.

The company culture inspires her to do her best work, she says.

“I try to give 180 percent every day,” she says. Maybe her hard work will inspire more great landscaping, she says.

“When people see a property we’ve left and how good it looks,” she says, “maybe it will make them want to take good care of their own place.”

Lindsay is just one of the dedicated team members we have here at Level Green Landscaping. And we’re always looking for hard-working, talented people to join our team.

Are you ready to work for a strong, growing company that rewards skill and hard work?