If your U.S. history is a bit rusty, or you have a question about how American government works, ask Rosvin Lara.

He was born in Guatemala, but his knowledge about this country is pretty good. He just became a United States citizen, so go ahead, ask him anything.

“It’s amazing for me and my family,” says Rosvin, an operations manager at Level Green Landscaping.

Rosvin has lived in this country for nine years and decided last year to apply for citizenship. His church pastor helped him fill out the long application.

“Not too long,” he says. “It wasn’t too difficult. The hardest part was the studying. There were 100 questions about U.S. history, geography, and government. I studied at night when I got home.”

His wife, Sara, already a U.S. citizen, quizzed him.

“This Is a Great Nation”

“Ten years ago it wasn’t my plan to be a citizen of this great country,” Rosvin says. “But after living here nine years and getting my residency after five years, I started thinking.

“When you’re a U.S. citizen you can vote. You can run for jobs in government. You have to renew your green card every 10 years but when you’re a citizen you don’t have to think about that.

“This is a great nation, a really wonderful country,” Rosvin says. “There are lots of opportunities here — that’s why I came.” 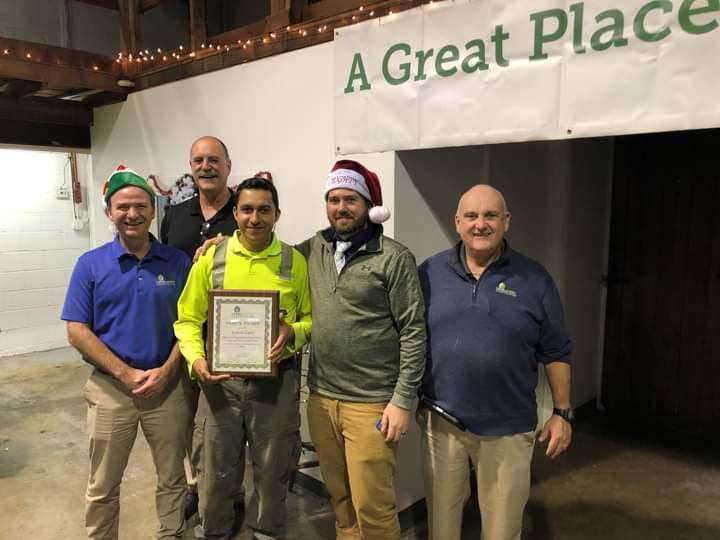 Rosvin started at Level Green five years ago as supervisor, won a Supervisor of the Year award and was promoted to operations manager in January 2020. He loves his landscaping career.

“I don’t plan to move back to Guatemala,” he says. “My family is here — my wife, my 3-year old son, Jaziel. I feel part of this country now.”

After the citizenship ceremony, Rosvin celebrated at home with friends from church, good food, and tasty cake.

His Level Green family celebrated the achievement with him, too, he says, including company co-founders Doug Delano and Bill Hardy.

“Bill and Doug called me in to congratulate me,” Rosvin says. “They even gave me a gift.

“They care about your personal life here, too,” he says, “not just your job. Everybody here encouraged me.”

Now he encourages others to get citizenship, too.

“A lot of people don’t apply because they think it’s really hard,” he says. “If you keep studying, you can do it.”

Rosvin still has his Guatemalan citizenship and passport, he says. He grew up on a farm there, where coffee bean trees flourished and life was busy caring for horses, cows, and chickens.

“The country where you were born is always special,” Rosvin says. “I still have family in Guatemala, so we’ll go visit. When you have a U.S. passport, you can go to other countries and there aren’t a lot of questions when you come back.

“But I really love this country,” he says. “Getting citizenship is amazing. It’s something really big for me.”

Rosvin is just one of the dedicated team members we have here at Level Green Landscaping. And we’re always looking for hard-working, talented people to join our team.

Are you ready to work for a company that encourages growth in your career — and your life?