Have you ever bought something? Jordon Foss might have sold it to you.

He started his sales career at age 19 and has sold watches, solar panels, real estate, and pest control. He’s waited tables at restaurants and tended bar.

You’ll have to look elsewhere for that watch or new house.

But if you need your company’s landscaping to wow, Jordon can set you up.

Jordon is one of those guys who loves talking to people. His favorite part of high school was making friends.

“My mom always called me a social butterfly,” he says. 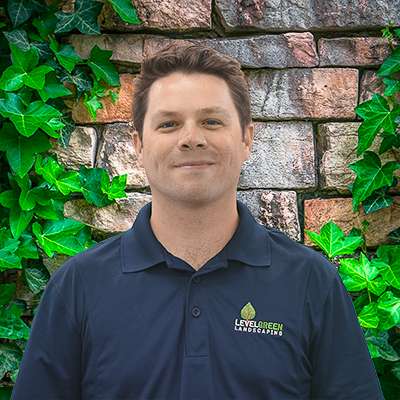 Sales suits him. He’s learned a lot from selling so many things to so many people. Especially selling solar panels door to door.

“Selling door to door is terrible,” he says. “People slam the door in your face. I was really upset the first time it happened. I sat in my car just steaming. But it gave me a lot of good experience dealing with rejection.

“People are going to say no to you. Learning that early on really helped me later down the line.”

When he worked at Orkin selling commercial pest control, Jordon was named Rookie of the Year his first year and went on to be fourth in sales in the region by his fifth year. He was always in the top 10.

He met Level Green Business Development Manager Adam Smith at a Christmas party. When Jordon knew it was time to move on, he called Adam, and landed his position in June 2021.

It All Starts with a Chat

His top strategy: be himself. Be nice. Be honest.

“My instinct is to make friends with people,” he says. “So I try to create a relationship.”

Want to talk about golf? He plays at least once a week.

Were you a Boy Scout? He achieved the highest rank of Eagle Scout at the impressive age of 15.

Have a dog? His golden retriever is named Stella.

Love sports? Don’t get him started. He’s a fanatic about Washington teams, from the Wizards to the Nationals to the Capitols.

Ever play lacrosse? He played for nine years and coached the sport.

“Whether you’re selling landscaping or real estate or pest control or solar panels or watches, people want to work with people they like,” Jordon says. “They stay with companies because they have a relationship.”

Until something goes wrong.

“My goal is that when the time comes, they won’t google ‘landscaping companies in DC.’ They’ll pull out my card and call Jordon.”

“I’m a sponge,” Jordon says. “I ask a lot of questions. I bring an operations manager or branch manager or account manager to all my meetings with potential clients and I soak up what they say.

“On property site walks, I ask questions and jot everything down,” he says. “What’s this flower? Does it get replaced every year? I listen and learn.

“If I don’t know the answer to a question, I’ll say I don’t know, but I’ll find out. I hope customers see that as an honest person who’s not just telling them what they want to hear.”

Hanging with Stella and Spider-Man

Jordon and his wife Devin have been together for 10 years and share their home with a golden retriever named Stella.

They met at the beach, and still head there almost every weekend during the summer.

They golf together, take Stella for romps at the park, and during COVID lockdown watched every single Marvel movie.

Selling the Next Level

The satisfaction Jordan gets here goes beyond selling a nice watch.

“We’re dealing with peoples’ businesses,” he says. “Sometimes we help them finally solve a big headache. We’re helping people get from one level to the next.

Jordon is just one of the dedicated team members we have here at Level Green Landscaping. And we’re always looking for hard-working, talented people to join our team.

Are you ready to work for a company that loves to help its team members learn and grow?