Is it a big deal that Dave Briggs has worked at Level Green Landscaping for 15 years?

Depends on who you ask.

Around here, it’s a pretty big deal. Dave was the first account manager to come on board, back in 2005 when just a handful of employees worked here.

But it’s all a matter of perspective, Dave says. His twin brother, Tom, has worked at the same electrical company for 35 years.

Leave it to your twin brother to show you up.

This milestone is a big deal to Dave. 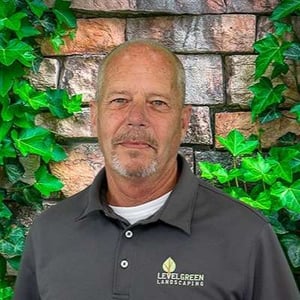 “Before this, a typical stint for me was five years,” he says.

“When I first started here it was Doug, Bill, and me sharing the same office,” Dave says. “Now we have five branches. The growth has been remarkable. I’ve loved being part of it.”

He’s seen a lot of changes.

“We used to do everything on Excel spreadsheets,” he says. “Then we got this new computer system. I was stubborn. I kept doing it the old way. They said, ‘Do it the new way.’

“Everything is so much easier with technology,” he says. “It frees up a lot more time to focus on our customers.”

“I Know What My Customers Need”

Dave’s job as account manager is multi-faceted, but it boils down to a couple key things: making sure the customers are happy, and making sure their properties’ landscaping is appealing, healthy, and impressive.

“The first summer I was here I was out knocking on doors to get customers,” Dave recalls. “I still have some of those customers.”

He knows them pretty well by now. Dave can tell you whose daughter is a sophomore in college in Florida, who’s headed to a golf vacation, who has a new grandson.

“They ask about my kids and my grandkids,” he says. “It’s a personal relationship, along with a business one. We talk business for the first 20 minutes, then we talk about personal stuff for another half hour.”

The business portion of their chats is short because Dave usually knows what his customers want before they get a chance to ask him.

“The demands on property managers have grown dramatically over the years,” he says. “They have to do more and more with less and less. I do as much as I can to make their lives easier.”

“All the customers love Dave — I hear it all the time,” says Joey Schneider, a Level Green branch manager who has worked with Dave for eight years. “He makes people instant fans of the company.”

Having him around for 15 years is valuable in a lot of ways, Schneider says.

“I can pick his brain about how he dealt with things in the past,” he says. “I’ve learned a lot from Dave over the years about the way to treat customers. Treating them like family and friends is so important.

“There’s huge value in having a consistent, long-term person with experience on the team,” Schneider says. “As we continue to grow, we’ll have more new account managers. They can learn a lot from Dave.“

Meanwhile, Dave always kills it in the sales department, says Level Green Managing Partner and Co-founder Doug Delano, who worked with Dave at another landscaping company for a few years before bringing him on board at Level Green. He’s great at getting renewals and sells enhancements like crazy.

“Dave likes what he does and is very good at it,” Delano says. “If we can make people happy and content here, give them room to grow and room to do what they like to do, that’s what we want to do. We love to have people stay and retire with us.“

Dave loves taking on a new property that’s a mess, and working together to make it great.

He tells about reviving an old HOA and how great it looks now that the weeds are gone and the overgrown shrubs removed.

“We chipped away at it, while staying within their budget,” he says.

He tells of a property with office buildings, retail, and a hotel with a big expanse of boring turf transformed into a lively gathering place with seating, shade sails, a putting green, and a sea container-turned-bar.

“It’s a gathering place, day and evening,” he says. “Being part of changes like that is really cool.

“I like that every day is something new,” Dave says. “Whether it’s a fire to put out, or getting to know new customers, and helping them be successful.

“You take care of your customers,” he says, “and the benefits will come later.”

He plans on taking care of his Level Green customers for a few more years.

“You don’t come across a company like Level Green very often,” Dave says. “I’ve had head hunters call me. I always say, ‘No, thanks, I’m not interested. I’m happy here.’”

Dave is just one of the dedicated team members we have here at Level Green Landscaping. And we’re always looking for hard-working, talented people to join our team.

Are you ready to work for a company where people like it so much, they stick around?