Here’s how Level Green Landscaping prepares its people, from keeping them safe to boosting their morale during this cold, tough work.

Dealing With The Unpredictable 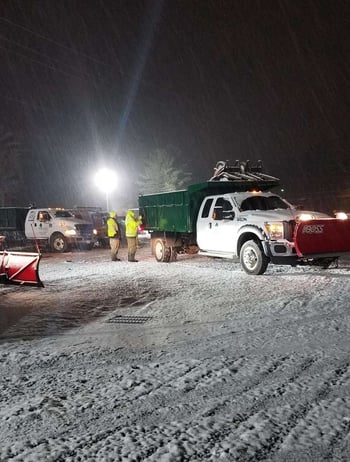 Meteorologists originally predicted 2 to 4 inches of snow for the recent January storm that blasted into the D.C. area. Instead, close to 5 inches fell.

Then, bam, another round was close behind — expect another 2 to 3 inches, forecasters said.

But another 4 to 6 inches actually fell.

That's hard to prepare for, but this kind of thing happens in the mid-Atlantic, where winter weather is notoriously hard to predict.

Uncertainty is part of the challenge.

Level Green managers try to tell crews how long it will take to clean up after a storm, but it’s often a rapidly moving target.

The bottom line: prepare for a long event.

Even a 12-hour shift seems long when you’re not used to working that many hours, and snow removal can stretch beyond that.

When managers see a big snowfall in the forecast, they pull crews off their regular jobs and send them home to get some sleep.

Then they transform production trucks into snow removal trucks, with plows ready to push snow.

Food And Water For The Long Haul

Managers encourage crews to drink a lot of water leading up to the storm. Even though it’s cold out, you’re still sweating out there. The air is dry, the wind is blowing. It takes the water right out of you.

And you can’t plan on cruising through the Burger King drive-through.

Crews need to bring enough food to make it through a long shift. There’s no guarantee stores or restaurants will be open in treacherous weather. 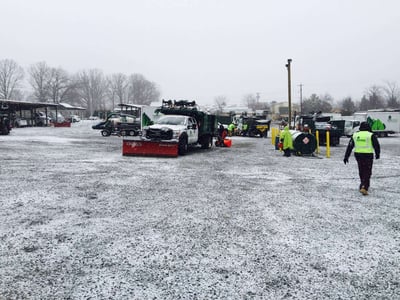 That won’t cut it for a long stretch of snow removal.

They’ll last about an hour, then they’ll be a sopping wet, frozen mess.

Crews are encouraged to wear waterproof everything, from pants to boots to jackets and gloves.

Getting Rest When You Can

There’s no getting around it — snow removal during a big storm is exhausting.

But rested workers are safe workers, so snow removal crews take naps as needed and get half hour lunch breaks to recharge.

If an event lasts multiple days, or workers are exhausted, Level Green pays for hotel rooms if they can’t get home to their own houses.

That provides a welcome chance to get out of the truck, grab a shower and get some sleep.

As crews tackled the unexpectedly heavy snowfall from the recent storm, they were looking forward to heading home.

Then they saw the forecast that a second storm was coming. It was defeating and deflating news for a crew that just worked 16 hours. Morale was low.

It’s a welcome gesture of appreciation for crews putting in the hard work, getting wet, getting cold, keeping Level Green clients safe.

Food, snacks and beverages are often waiting back at the office when crews end their shifts.

But mostly, everybody wants to just go home and get some sleep.

In the days after a storm, managers try to ease off the hours crews work. Everybody’s exhausted.

But the weather isn’t always as understanding.

Days after this most recent storm, warmer daytime temperatures melted snow and ice, but below freezing weather at night caused the puddles to refreeze.

Battling ice is an ongoing challenge.

Tackling The Tough Stuff Together 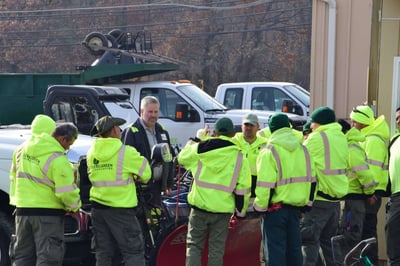 If one crew wraps up their snow removal work, but another one has hours to go, they join them.

Everybody helps each other out, working together to get everything done.

That sense of teamwork and camaraderie is a big morale booster during this cold, tough, tiring work.

It’s just one of the many ways the Level Green team carries out the company motto: “Do the Right Thing.”

Sure, snow removal is hard work, but it’s just one part of the rewarding work we do here. And we're all in it together.

Are you ready to work for a strong, growing company that prepares and appreciates its employees?