Everybody loves being recognized for great work.

Level Green Landscaping’s three 2016 Supervisors of the Year know that feeling. The supervisor awards are a highlight of the company’s holiday party.

“Everyone gets a big smile on their face when they win,” says Paul Wisniewski, a Level Green branch manager.

“You get to stand up, be applauded, be recognized in front of your peers,” says Bradley Sarno, enhancement operations manager. “It’s a good feeling.”

Meet the 2016 Supervisors of the Year:

On a recent chilly morning when many people were just waking up, Delvin Maldonado was already on the job, about to head to Prince George’s Sports Complex in Hyattsville, MD to install ornamental grasses and construct a stone wall.

A Level Green Landscaping enhancements supervisor, Delvin paused before heading to the job site to share how people make his job great.

“I like the team we have, and the people I work with,” he says, with translating help from enhancement operations manager Julian Tadeo-Hernandez. Delvin is from Honduras and speaks better Spanish than English. “My favorite part is how happy customers are when we finish a job and see what we accomplished.”

A good supervisor is always on time, plans each day well and works well with customers, Delvin says. But there’s more to it.

“You should have a good relationship with your crew members,” says Delvin, who has worked at Level Green for five years. “I want to know about my crew members’ lives. I talk to them a lot.”

Delvin has a way of rising above the challenges of the landscaping business, Bradley says.

“In our job, we deal with inclement weather, DC traffic, high-end clients with high expectations,” he says. “It can be challenging. But Delvin is always in a good mood. He brings the rest of the room up when he’s in it.”

When he heard his name announced as a Supervisor of the Year, Delvin says, “It made me feel really appreciated for what I do.”


Raul, a maintenance supervisor, has worked at Level Green for four years, earning steady promotions along the way. He’s moved up from crew to assistant supervisor to supervisor of a six-person crew. 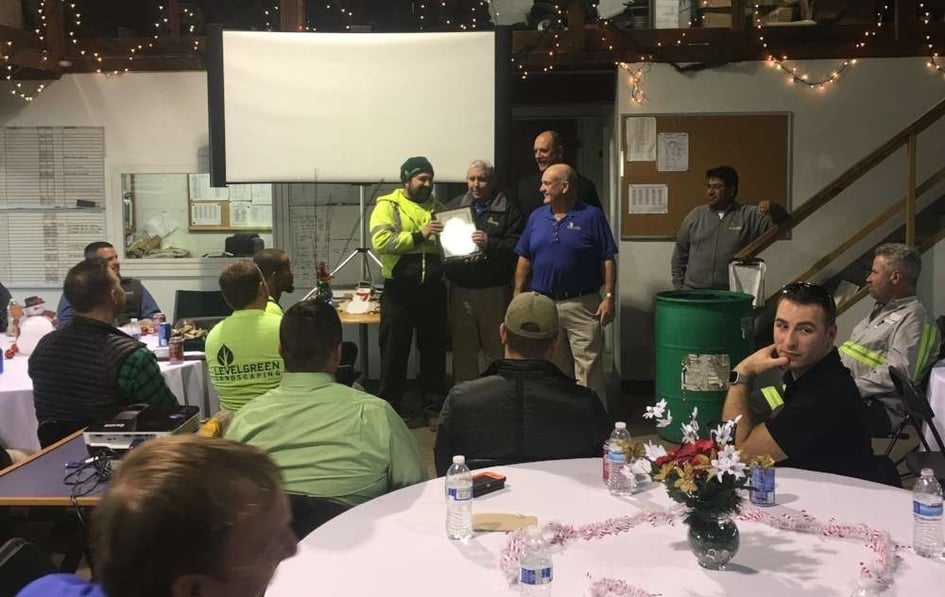 “He’s doing a good job,” says Juan Olivar, operations manager and Raul’s supervisor. “He treats his crew well. He follows instructions. He likes how this company cares about quality.”

Raul is originally from El Salvador. In the past he’s worked in landscape construction, and he worked for a while at a 7-11 store.

This job is a good fit for him, he says.

“I like learning and I like teaching people,” Raul says. “The owners are really nice and the money is good.

“This is a good company,” he says. “There are a lot of opportunities.”

Nicolas Cabrera loves the feeling of getting work done well, exactly the way the clients want it done.

As maintenance supervisor of a four-person crew, that means he has to communicate well, he says, so everyone knows what to do — together.

“Everybody here works as a team,” says Nicolas, who has worked at Level Green Landscaping for three years. “When there are new people, we welcome them. It’s like a family.”

He was spending the day at Butternut Condominiums, where his crew was edging, mulching and doing general landscape clean-up.

“The thing I like about Nicolas is he always treats everybody equally and with respect,” says Jose Ruiz, operations manager and Nicolas’ supervisor. Jose also helped translate for Nicolas, who’s from Mexico. “He always asks his guys, ‘Please, will you do this for me?’”

Skilled and knowledgeable about his field, Nicolas always has a good attitude, Jose says.

“Even if he’s sick, he never complains and he’s always willing to give his best effort to get the job done,” he says.

When branch manager David Roles announced his name as Supervisor of the Year at the holiday party, “It was a surprise for me,” Nicolas says.


Delvin, Raul and Nicolas are just three of the dedicated team members we have here at Level Green Landscaping. And we’re always looking for hard-working, talented people to join our team.

Are you ready to work for a company that has fun, works hard and recognizes the efforts of employees?