If he’s on your property, it’s in good hands. He won’t climb back in his truck until everything looks just right. 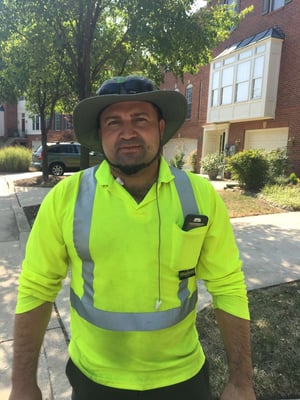 Raul, a maintenance supervisor, has worked at Level Green Landscaping for nearly seven years, earning steady promotions along the way. He’s moved up from crew member to assistant supervisor to supervisor of a six-person crew.

He won a Level Green Supervisor of the Year award in 2016.

He takes his work seriously.

A natural teacher, Raul explains exactly how each job should go, making sure his crew tackles every job with skill and precision.

“Every morning I talk to my guys, explain what we’re going to do, what plans we have,” he says. Pull the weeds first, then mow, wrap up with the weed eater.

Raul is originally from El Salvador. In the past he’s worked in landscape construction, and he worked for a while at a 7-11 store.

This job is a good fit for him, he says. He loves learning and teaching.

“I’ve learned a lot and gotten a lot of experience,” he says.

He especially loves big jobs, he says. He’s the sole supervisor of the landscaping for the South River Colony HOA, a sprawling, high-end development in Edgewater, Md. that includes 15 different clusters of large, expensive homes over five square miles. The homeowners expect perfection.

“Our Properties Have to Be Beautiful"

“I like to have my crew in order,” Raul says. “I pay attention to the details. Our properties have to be beautiful.”

He’s always on the lookout for weeds, dead branches that need trimming, anything that looks messy or out of place.

“I’m looking at every inch of the property,” he says.

He’s a stickler for safety.

“Each guy has to have earplugs and safety glasses and sometimes masks,” he says. “I check every two hours to make sure they’re all wearing safety equipment.”

It’s serious business, but Raul handles it with a smile.

“I like to be friends with my crew,” he says. “I try to make sure they’re happy.”

He’s quiet and reserved, Keffer says, but has impressive communication with his crew.

“Raul has trained each and every one of them himself, for their specific function on the crew,” Keffer says. “He spends a lot of time teaching them to use each piece of equipment safely. Safety is a big thing for Raul. His safety incidents are among the lowest in the company.”

He loves fishing for catfish and blue fish and turning them into tasty meals.

He takes his kids to the park and the beach.

From Weeds to Wow

“I like working here,” Raul says. “It’s very clean and organized and the people are very nice.”

There’s satisfaction in his work that keeps him coming back.

“When we get a new property, there might be a lot of weeds,” he says. “Soon, the property changes a lot. When we plant flowers at the front entrance, it looks very nice.”

He’s proud to be part of the transformation.

Raul is just one of the dedicated team members we have here at Level Green Landscaping. And we’re always looking for hard-working, talented people to join our team.

Are you ready to work for a growing, successful company that supports you in your career growth?