If you’re one of Ryan Rimshaw’s landscaping customers, you’ll get to know each other pretty well.

But there's a lot to discover, so here’s a shortcut.

He collects cars, and has two Jeeps painted exactly like the Jeeps in “Jurassic Park.”

He owns five dogs. He built a train track around his house with a working train you can ride. The dogs love it.

He rode dirt bikes professionally, until one day he crushed a disc in his tailbone — the hazard of doing jumps on a dirt bike at 100 miles per hour.

And if you want to talk landscaping, the Level Green account manager studied it for eight years and owned his own landscaping company.

That’s A Lot Of Learning

Ryan started out at Pennsylvania State University studying civil engineering and roadway and bridge construction, but he soon switched to landscape architecture.

He earned a degree in that as well as in landscape design and build, spending six years in college full time and two years part time, including some study abroad time in England.

Ryan went on to own his own landscaping company then spent 14 years at another company in a host of jobs, from landscape field manager to enhancements manager to purchaser. He ran a satellite branch.

He must know a lot.

“I know just enough to know what I don’t know,” he says with a laugh.

He Wants To Shake Your Hand 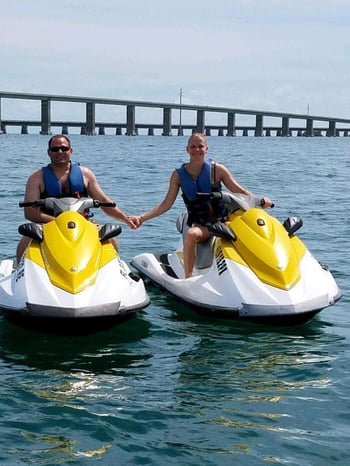 “I love dealing with customers and developing relationships,” he says. “It’s all about keeping customers happy, doing quality inspections, helping operations managers do their best job.

“We all can cut grass, we all use the same kinds of mowers,” he says. “Developing a level of trust is how you set yourself apart.”

Expect to see him a lot.

“So many people hide behind their computer screens and cell phones,” Ryan says. “I’m old school. I want to shake a hand. Make eye contact. If you’re just bouncing texts back and forth, it’s a lot harder to establish that relationship.”

He loves feeling a sense of trust develop.

“When property managers start asking my advice about their landscaping at home, or about another property they own that we don’t manage,” he says, “that’s when I know I’ve really made a connection.”

“He’s Seen It Before”

“He’s really able to help his customers with any issues and concerns they have,” Schneider says. “He’s seen it before. He knows the solutions, as an expert in his field. Or he knows where to get the answer, which is just as important.”

The account manager is one of the most critical positions for customer retention and growth, Schneider says.

Ryan has the kind of personality customers love, he says.

“He sounds happy and excited when he’s talking on the phone,” Schneider says. “Customers know they’re not calling some 1-800 number.”

Dogs, Trains And Jeeps At The Compound 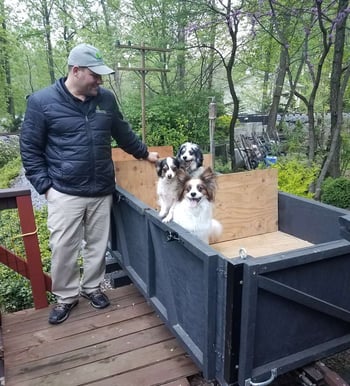 Away from work, Ryan shares his home with his scientist wife, Ashley, “and five crazy dogs.”

Izzy is an Australian shepherd and spaniel mix.

Rocco is a papillon, a type of toy spaniel with long, fringy hair on its ears.

Daisy is a long haired chihuahua.

Sandy is part golden retriever and part either collie or sheltie.

He thinks Lala is a Maltese and terrier mix. Ryan found her abandoned, cowering under his truck at a construction site, fur matted, trying to stay warm in the pouring rain.

She quickly joined the family.

They all live on a 3.5-acre property Ryan’s friends call “The Compound.”

And he builds railroads. Think about the miniature trains you often see at zoos or amusement parks. Or around Ryan’s house.

It’s called grand scale railroading, and only a few hundred people in the country do it. There’s a 3/4 mile train track around his house complete with a train you can ride.

He also loves camping, and scuba diving in Aruba and the Bahamas. 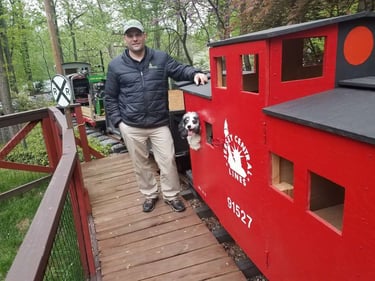 Energetic and outgoing, Ryan’s that guy at the party who wants to meet everybody.

Every time he meets somebody new, he says, he learns something.

“The intriguing thing about landscaping is you meet people from all different backgrounds,” he says. “I love hearing their stories, connecting with them.

“I love learning,” he says. “You can never learn too much.”

Ryan is just one of the dedicated team members we have here at Level Green Landscaping. And we’re always looking for hard-working, talented people to join our team.

Are you ready to work for a growing, supportive company where relationships are number one?