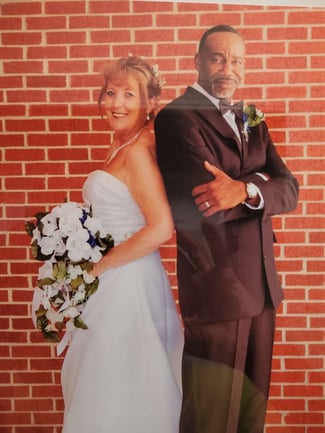 Wendell Thompson is good at spotting the little things.

A couple stray weeds by the side of a ditch. (But don’t tell him those are little. To him, they’re huge.)

“Bass fishing is a little like landscaping,” he says. “The more time you spend doing it, the more it becomes second nature.

He has mostly good days.

“It Gives Me Freedom”

Wendell has been a supervisor at Level Green Landscaping for seven years and worked at a lawn care company for 14 years before that.

He’s been a carpenter, poured asphalt and for 12 years was a restaurant cook.

Wendell stuck with landscaping, now supervising maintenance at about 20 sites in St. Mary’s County, from sprawling parks to schools to office buildings.

“It gives me freedom,” he says. “I like to be outdoors. I’d much rather be working outside than inside behind a computer straining my eyes.”

Eye strain would interfere with his eagle-like vision.

Wendell sees everything, especially stray weeds along ditches, next to company signs, and by entrances.

“It has to be on point,” he says. “By that I mean everything has to be done right, with nothing missed.

“If you miss something, it sticks out like a sore thumb.”

Even when he’s maneuvering the massive 16-foot batwing mower, paying close attention to his own task, he’s surveying the big picture.

“He Takes A Lot of Pride in His Job”

“It’s a machine that can do a lot of damage if it’s not run properly,” Gates says. He ran one himself for 15 years.

“You’re watching not only in front, but both sides,” he says. “You have to listen for certain sounds. You can’t just throw anybody on it.”

Weeds are a constant battle, as the sprawling parks don’t get the turf treatments most commercial properties do.

It’s why Wendell talks a lot about getting every pesky  weed.

“He takes a lot of pride in his job,” Gates says. “He lives out here in St. Mary’s County. He went to a ball game last weekend at one of the parks he cuts. He’s proud of his work.

“He has a good relationship with his guys,” Gates says, “and that means a lot when you work with the same people every day.”

The Rewards of Good Work

Wendell likes the rewards of this work, from visibly improving properties to establishing friendly relationships with customers.

“Customers will go to work and see their property one way, and when we’re done it looks completely different,” he says. “They have a smile on their face and say, ‘Thank you — it looks good.’”

That’s a great feeling, he says.

The challenges of his job?

“Getting up in the morning,” he says with a laugh.

Then he gives this serious thought for a minute.

“I’ve been doing this for so long, it’s second nature to me,” he says.

“The goal is to catch the biggest five fish you can,” he explains. “It goes by weight.

Out on the water under blue sky, enjoying the sun and the breeze, he’s doing real well even if he doesn’t catch a thing.

“Bass fishing keeps me sane,” he says. “The thing about fishing is it’s never the same. Different weather, different seasons, and the weather can even change throughout the day.

“Every time I go, it’s an adventure,” he says. “Will there

be fish? Will I need to move around much to find them? It’s like a puzzle you have to put together.”

His dad used to take him fishing on the Potomac when he was a kid, growing up in St. Mary’s County where he now tends to customers.

“We’d take the boat out, drop anchor and bottom fish,” he says. “But there’s not always fish there. So you look for drop offs, rock piles, structures. The little fish go there to hide, and the big fish go to eat ‘em.”

Wendell and his wife, Linda, share their home with Rambo, a pit bull and Shar-Pei mix they rescued from a shelter.

He’s a laid back pooch, but greets Wendell at the door after work with excited barking that starts as soon as he sees his car round the corner from the front window.

Wendell is famous for his homemade beans and franks.

We have to ask.

Turns out the secret is adding a bit of King Syrup, pancake syrup, brown sugar and onions.

Wendell simmers it all together then tops his creation with a mix of shredded cheeses.

“I Try Not to Let Them Down”

Wendell marvels at the annual Level Green summer picnic for managers and supervisors, when about 70 team members gather to celebrate their hard work with an afternoon of fun, food, games and great prizes.

“Any company that does that, cares about their people,” he says.

“You can tell Doug and Bill care about us,” he says of the company owners.

Wendell is just one of the dedicated team members we have here at Level Green Landscaping. And we’re always looking for hard-working, talented people to join our team.

Are you ready to work for a growing, successful company that really appreciates its employees?