The first thing Doug Delano says about how he ended up here might surprise you.

“I hated mowing grass,” he says.

Luckily, he grew up surrounded by gardeners, or you might not even be reading this story.

His dad grew fragrant roses and snappy stalks of asparagus. His mom nourished vegetable gardens and both grandmothers loved plunging their fingers into the soil.

It was in his blood. So after considering a career as a pastor, majoring in philosophy, teaching high school math and coaching football, Doug gave in to his calling.

“I wanted to be a landscaper,” he says.

Now he’s co-owner of Level Green Landscaping. But he started at the bottom, as most landscapers do, working as a laborer and truck driver at Ruppert Landscape.

“I went from a job that needed a college degree to one where all you needed was to be robust enough to dig holes all day,” he says.

But not for long. He took classes in horticulture and landscape design, and after a few months moved up to assistant supervisor.

Soon he was a supervisor on the construction side, then a project manager, overseeing several crews. After five years in construction he was promoted to area manager on the maintenance side. Then he worked in sales and was a branch manager.

He loved the journey. But when Ruppert was bought by a large national company, the thrill was gone.

A New Start, Plus Bill


Doug’s wife, Elizabeth Hannold, was a stay-at-home mom with their two sons, then ages 1 and 7. She suggested she go back to work so Doug could take a break.

“But I wasn’t sure what I wanted to do,” he says. Inspired by his father-in-law, a successful entrepreneur, he decided to start his own business. But he had primary care of their young sons, so he knew he couldn’t do it alone.

His thoughts turned to Bill Hardy, his longtime friend from Ruppert.

“I had known Bill a long time,” Doug says. “I trusted him. That’s the biggest issue in any partnership, whether in a business or a marriage.

“I knew Bill was the person to help me.”


From the beginning, the pair had strong values and high standards.

“If you make a commitment, you stand by it,” Doug says. “If you make a mistake, you fix it. Treat people as you want to be treated.

“It’s not always the most profitable thing to do,” he says,  “but it’s the right thing to do. And it has long-term benefits.”

He spends a lot of time looking ahead.

“A lot of my time is spent understanding, planning and keeping us on track,” he says. “I’m always looking to where we’re headed in the next six months, one year, five years down the road.”

But if you need a pep talk, he’ll set aside what he’s doing.

“I like the leadership role, the guidance role,” Doug says. “I coached football, and there’s not a lot of difference between coaching a team and leading a company. You need the same skills. It’s about getting people motivated.”


Doug and Beth’s sons are out of the house now. Marion is working toward his MBA at the University of Maryland and works at Level Green.

William, 18, is living in Rhode Island and attending the International Yacht Restoration School, a trade school that teaches the art of restoring and building wooden boats.

But Doug and Beth aren’t quite empty nesters. There’s Luc, a rambunctious 6-year old terrier mix they adopted and adore. He has a wardrobe of seasonal outfits and loves to go to work with Doug, trotting around visiting everybody until his dad reins him in. 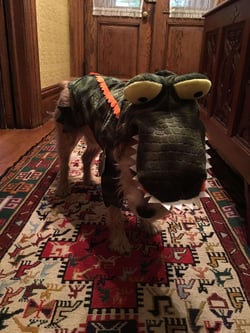 Doug and Beth hold tight to their faith and are involved at church, attending Capitol Hill Presbyterian, three blocks from the nation’s Capitol.

They recently bought a 1905 house on the Potomac River in St. Mary’s County and are working to bring it and its expansive 22 acres back to life.

It’s a perfect fit. Beth is a historic preservationist for the federal government and Doug, well, knows a few things about landscaping.

Luc does his part by tearing around the property chasing squirrels and groundhogs.

“It’s not about how much money Bill and I can make and put away,” Doug says. “We see our young employees buying houses, getting married, having children, raising families. They’re able to accomplish their goals because we’re accomplishing ours.

“Their goals become our goals,” he says. “We love watching them grow up.”

“That’s him — that’s Doug to a tee,” says Lynn Garris, Level Green office manager who has worked for the company since the beginning.

“He’s the biggest lovable person I know,” she says. “He’s a very sincere person, with very strong feelings. This company means a great deal to him. And not just the company, but the people.”

She tells of the recent company Christmas party, where Doug and Bill addressed their employees, thanking them for their efforts and sharing how much they mean to them. It got a bit emotional.

One of the newest employees at the party was a construction estimator, on the job just a few months.

“Afterwards he said to me, ‘I’ve never worked at a place where I felt so important and so appreciated,’” she says.

“He genuinely felt it.


Sure, it’s a Level Green motto you can clearly read on the wall. But Do The Right Thing runs deep for Doug.

“Personal goals and family should come first,” he says. “We’ve worked for places that said that was important, but they didn’t act like it was important.

“It's important to me that we’re running a company that has good values,” he says. “We’re trying to do the right thing.”


Doug’s at the top of the heap, but just one of the dedicated team members we have here at Level Green Landscaping. And we’re always looking for hard-working, talented people to join our team.

Are you ready to work for a company where doing the right thing matters?